by christie — last modified 2017-03-08 13:28
International support and solidarity can make a real difference in local worker struggles shows this week’s success in Sri Lanka. In a workers’ referendum in two factories with a long history of conflict between employees and management, workers voted to have the trade union recognized as legitimate bargaining partner. In the face of years of intense union busting, this testifies to the empowering nature of international solidarity, called in by the trade union. 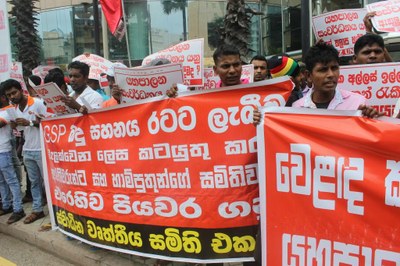 The union recognition vote was conducted last Tuesday 7 February at industrial gloves manufacturers ATG Ceylon (Pvt) and ATG Occupation Ltd in the Katunayake Free Trade Zone. The management has been in conflict with its workers over safety issues for over two years. As a next step in that process it organized the referendum to test the eligibility of the Free Trade Zones & General Services Employees Union (FTZ&GSEU) to be involved in the case. The management insisted on a vote despite the fact that the union had already been recognized as social bargaining partner since 2013. The referendum followed on a period of intimidation of workers for their union membership and other union busting measures. Nevertheless, the union won the vote in both factories. That ensures that the union is now recognized as a legitimate representative in the conflict on behalf of the workers.

The union FTZ&GSEU attributes the victory to the power of international solidarity and states that this victory sets a precedent of safeguarding labour rights in Sri Lanka through international mechanisms and support. General Secretary Anton Marcus states: ‘In a global economy it is not only investment and profits that travel across geographical boundaries, but also worker solidarity.’

In the months before this referendum Clean Clothes Campaign and other international organizations such as the Global Union Federations have supported the Sri Lankan union in several ways. CCC's actions included addressing international buyers of the company. In November CCC, IndustriALL and the International Trade Union Confederation called upon the EU to include labour conditions in its reconsideration of trade agreements with Sri Lanka.

Anton Marcus is hopeful that this recognition can be a new beginning: ‘After a period of conflict, we can now come to a new phase of understanding, in which we can negotiate as equals in a respectable environment. This outcome was possible because of the resolve with which the workers stood together and remained confident that collective strength can safeguard their rights.’