by mirjam — last modified 2016-10-31 10:19
We are calling for the release of Meng Han, Labour Rights Activist who was imprisoned by the Chinese government after his support for workers at a Chinese shoe factory led to a successful strike and negotiation with management. Brands sourcing from the Lide Shoe factory need to step in to ensure human rights are respected. 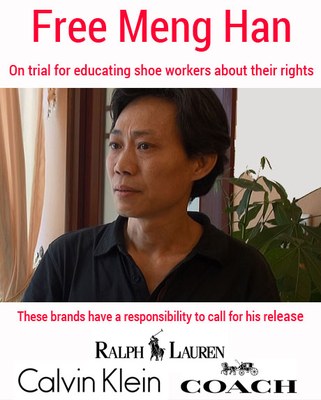 On 3 December, 2015, the Chinese authorities in Guangdong performed a wide-ranging crackdown on labour rights activists and labour organisations supporting factory workers. Many were detained or went missing, including Zeng Feiyang, the director of the Panyu Workers’ Centre, and Meng Han, a former staff member. Despite others being released in recent months, these two remain in prison where they have been denied the basic right to meet with lawyers, and the government news agency has released defaming reports against them.

The crackdown has been linked to a specific labour dispute at the Lide Shoe Factory in Panyu district, where a strike of more than 2500 workers led to a successful negotiation in 2015 with factory management over social insurance, housing contributions, overtime and other owed payments. Zeng Feiyang, Meng Han and the Panyu Workers’ Centre were actively involved in assisting workers in understanding their legal rights in this negotiation, and their continued detention by Chinese officials is believed to be a punishment and consequence of their supportive role in this struggle. Zhu Xiaomei, a further staff member, has been released on bail with serious charges pending.

This one case is symptomatic of a wider brutal and illegal political repression that is growing in China as the labour movement starts to really take root. With factory strikes happening more and more often and actual effective collective bargaining taking place in China, the authorities have responded in the way they know how – with arrests and intimidation. The persecution of independent civil society organizations that advocate on behalf of garment and footwear workers in Guangdong not only violates the associational rights of the advocates targeted, but effectively deprives workers throughout the province of the assistance of these groups, which is vital if workers are to achieve a greater level of respect for their rights at work.

On 1 May, groups in Hong Kong held a huge rally, when the arrests of these activists were denounced by workers there. International groups supporting Chinese organisers held a week of action to call for the release of Zeng Feiyang and Meng Han, who remain in custody.

You can sign the petition to call for release today. We are contacting the brands who were sourcing from the Lide Shoe Factory to ask them to use their financial influence to call for rights in China to be respected. Sign now >>