by mirjam — last modified 2015-11-20 10:18
Every week, a large group of workers who stitched sport shoes for adidas and the Japanese brand Mizuno protests outside the PT Panarub Industry building demanding reinstatement and compensation for the loss of income. 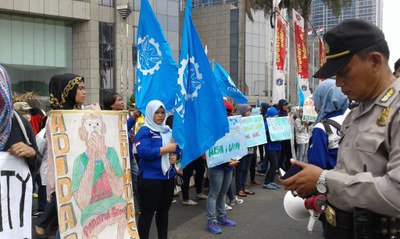 The group of mostly female workers has been trying to get their jobs back ever since 1300 of them were fired in July 2012 by the management of the PT Panarub Dwikarya Benoa company. Just before they lost their jobs, 2000 workers held a strike to demand the right to freedom of association and a back payment of the legal minum wage. After the unfair dismissals, the factory continued with intimidation of striking workers.

Kokom Komalawati, president of the union SBGTS-GSBI  told CCC how in 2012 police used tear gas against the striking workers, including pregnant women. She also says how local thugs, supervisors and management have attempted to force workers back to work and workers have been told that if they want to return to work they had to resign from the union, decline from being involved in strike action and say they were forced to join the strike by her.

In August, the group took took to the Japanese Embassy in Jakarta to demand their immediate reinstatement.

"The PT Panarub Dwikarya case is a proof that the workers in Indonesia have no guarantee of a decent life and well-being. Adidas and Mizuno have the responsibilty to ensure these workers get their jobs and livelihoods back, and until they do so, we will keep demanding our rights,' says Kokom Komalawati, president of the union SBGTS-GSBI.

PT Panarub Dwikarya Benoa is a factory of PT Panarub Group based in Benoa Kota Tangerang, Banten Province that produces footwear (shoes) for sports brands Adidas and Mizuno, with Mizuno producing in the factory for years and adidas being a long term buyer from the Panarub Group. The factory were the violations occured, was subcontracted to produce sport shoes for adidas.

All this time, adidas and Mizuno have not brought a solution closer, leaving the workers with no other option but to continue their struggle.

Many of the dismissed workers had been working for the company for year, with some of them working there for over a decade. One worker allegedly died as she could not afford her medication, and others were left by their husbands after not being able to provide an income. Two workers were evicted after they could not pay their rent and several workers kept being intimidated by their new employer to resign their union membership, with some of them loosing their job.

During the protest the workers spoke out about the labour violations in their factory, while others held banners saying 'Mizuno does not take responsibilty for firing 1300 PDK workers!'

The workers keep urging adidas and Mizuno to resolve this case as soon as possible.