by mirjam — last modified 2016-07-20 12:14
Clean Clothes Campaign is shocked by the murder of Kem Ley, a Cambodian political analyst and ally of the labour movement. He was shot in broad daylight on Sunday early morning, just days after Kem Ley spoke on a radio talk show on the prime minister's possible involvement in corruption and after being involved in the Black Monday Movement. 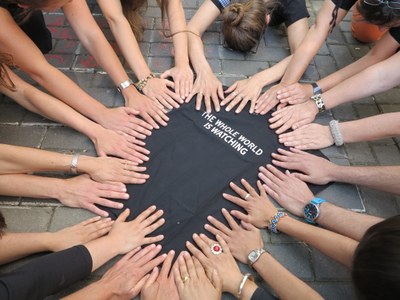 Clean Clothes Campaign support the statement of seventy united organisations calling for a prompt, thorough and independent inquiry into his death.

Just weeks ago Kem Ley was part of the Black Monday movement, also supported by CCC, calling for the release of arrested human rights defenders, a movement violently obstructed by security guards.

Political tensions are rising in Cambodia ahead of commune elections in 2017 and national elections in 2018, with many human rights defenders arrested. It it is imperative that the investigation surrounding Kem Ley’s murder be conducted with the utmost transparency if it is to be credible and diffuse misunderstandings, which would impact on the chances of upcoming elections to be free and fair.

'We urge the govenment to release the detained human rights defenders, stop the intimidation of civil society and ensure a free democracy,' says Mirjam van Heugten from Clean Clothes Campaign.