by christie — last modified 2016-07-05 13:58
Clean Clothes Campaign is shocked and highly concerned by the murder of trade union activist Brenda Marleni Estrada Tambito last month. Her murder was one in a range of trade union activist killings and harassments in Guatemala in the last years. In a letter to the Guatemalan President Clean Clothes Campaign condemns the murder and urges to bring the responsible to justice. In a letter to the Guatemalan labour movement, it expressed its solidarity in these difficult times. 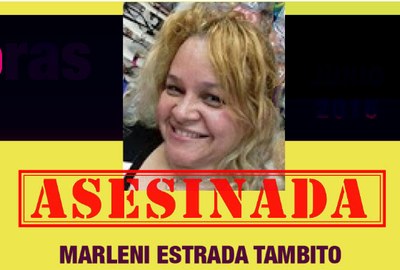 To the labour movement of Guatemala, her women defenders, and to the Concertación Regional de Mujeres por un Trabajo Digno (Women Regional Coalition for Decent Work)

Clean Clothes Campaign, an international network of more than 250 trade unions, labour, women and consumer organizations, operating in different continents to improve working conditions of men and women working in the clothing industry, strongly condemns the brutal murder of Brenda Marleni Estrada Tambito, who was shot five times as she drove through Guatemala City on June 19th 2016.

The murder of the labour rights defender Brenda Marleni Tambito Estrada is not an isolated case. She was the second trade union activist murdered in Guatemala this year, among 96 murdered union activists in eight years. In addition, during the first quarter of 2016 only, another trade union member was physically attacked and 12 union activists were threatened or harassed, according to the Red de Defensores de Derechos Laborales (Labour Rights Defenders Network) in Guatemala.

The international labour movement will not tolerate the continued killing, threatening and harassment of unionists and lasting culture of impunity in Guatemala. Therefore, the Clean Clothes Campaign joins the call of the Association of Home, Domestic and Maquila Workers (ATRAHDOM) to urge the Justice Department and the Commission Against Impunity (CICIG) to carry out an immediate, thorough and impartial investigation of the murder of Brenda Marleni Estrada Tambito, and that those responsible be brought to justice in accordance with international standards.
We also urge that all necessary protective measures be taken to guarantee the physical and psychological integrity and security of Brenda Marlini Estrada Tambito's family, and of all trade union leaders and human rights defenders, in order to enable them to carry out their responsibilities without fear of reprisals.

We would like to express our solidarity with the family of Brenda Marleni, as well as to other unionist in Guatemala who within the present conditions of systematic violations of human rights, continue to struggle for the defense of labour rights.
In solidarity,

In a letter to the Guatemalan President Clean Cloth Campaign urges to bring the responsible for the murder to justice.