by christie — last modified 2016-04-24 08:51
Today, on the third anniversary of the Rana Plaza tragedy, the Clean Clothes Campaign reiterates its solidarity with the survivors and the families of the 1,134 killed when the building they were working in collapsed on 24 April 2013. Over the past three years the Clean Clothes Campaign has fought with these families to demand and win compensation for their losses, and we will continue to support their ongoing struggle to attain full justice. Above all, we continue to press for the structural changes that are vital to prevent catastrophes like these from happening in the future. 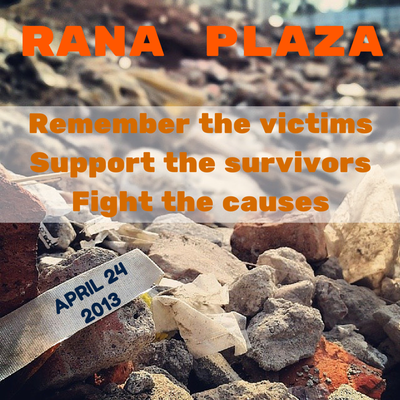 On the morning of the 24 April 2013 the Rana Plaza building, in Savar, Bangladesh, came crashing down, killing 1,134 people and leaving thousands more injured. The building housed 5 garment factories producing for major European and North American brands. The fact that the building had been evacuated the day before the collapse, when large cracks in the walls had become visible, underlines the negligence which had led to an entirely avoidable death toll.

In the months and years that followed, intensive campaigning by many international organizations and increased political and public attention, led to important initiatives addressing the plight of the survivors and the issue of workers' safety in Bangladesh. The Rana Plaza Arrangement was established to compensate affected families for loss of income and the Bangladesh Accord for Fire and Building Safety has proven a promising example for addressing the structural safety defects in garment factories in a country were auditing up until then had been largely inadequate.

Nevetherless, while much has been achieved in the last three years, more needs to be done. Legal cases meant to provide full compensation to the survivors and to bring those responsible to justice are underway, but move at a very slow pace. Also the fact that the overwhelming majority of Accord-inspected families are currently behind schedule in repairing the uncovered safety defects, is very worrying and continues to constitute a danger to workers' health and safety. The initial progress in the field of freedom of association in Bangladesh, so vital for workers to be able monitor the safety of their own working conditions, is in the process of being reversed. Clean Clothes Campaign keeps on monitoring these developments. As Rana Plaza has shown, the right to refuse dangerous work is vital to worker safety, however workers are only able to exercise that right if freedom of association overall is fully respected. We urge brands to do much more to create a positive climate throughout their supply chains in which workers can freely express and associate themselves.

The Rana Plaza Arrangement was set up not only to provide compensation to the families affected by this particular catastrophe, but also to set an example to be used in similar cases. The model has already been applied in case of the Tazreen factory fire of 24 November 2012 in Bangladesh in which 112 workers died. The families affected by the Ali Enterprises fire of 11 September 2012, killing over 250 workers, however are still waiting for a process to address their need for compensation to start. Clean Clothes Campaign keeps on struggling for these survivors to receive full and fair compensation and calls upon all stakeholders, including German retailer KiK and the Pakistani government, to make this possible.

On 24 April we commemorate those that were killed three years ago because of the neglect of the directly responsible and the structural problems of the garment industry. Our thoughts are with those missing a loved one or struggling with the memories of that terrible day. The rest of the year we fight those issues that made Rana Plaza possible to prevent such a disaster from ever happening again.