Open letter to all brands sourcing from Cambodia

by mirjam — last modified 2016-04-04 13:48
Clean Clothes Campaign published an open letter to all brands in Cambodia to publicly support freedom of association and independent unions in Cambodia. We call upon the brands, representatives for H&M, Inditex, C&A, Levi Strauss, Marks & Spencer, Tchibo, Primark and other brands to widely disseminate a public support statement, for a Trade Union Law which fully complies with ILO Conventions 87 and 98 as a condition for future sourcing from the country. 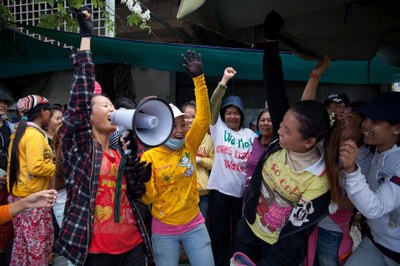 As you know the Cambodian government is currently drafting a new Trade Union Law aimed at regulating the Kingdom’s 3,400 trade unions. Concerns around the draft Law are growing as the current proposal is not in compliance with ILO conventions 87 (Freedom of association and protection of the right to organize) and 98 (Right to organize and collective bargaining), both ratified by Cambodia. Based on the recommended amendments of the Joint Committee formed to review the draft law, articles and provisions that infringe freedom of association and trade union autonomy are maintained in the final draft bill. A number of trade unions and human rights organisations have approached the Cambodian Government with their concerns and recommendations to the law.

You, however, remain silent. We know that Ethical Trading Initiative (UK), of which some of you are members, has sent two letters with your signature to the Cambodian Government on the issue. The letters have so far not been published.

We, the signatories of this statement, strongly urge that you, as influential brands sourcing from Cambodia, publicly support freedom of association and independent unions in Cambodia. We call upon you, representatives for H&M, Inditex, C&A, Levi Strauss, Marks & Spencer, Tchibo, Primark and other brands to widely disseminate a public support statement, for a Trade Union Law which fully complies with ILO Conventions 87 and 98 as a condition for future sourcing from the country. Such a statement from your side will show that you take your due diligence responsibility seriously and would be a clear signal to the Cambodian Government to ensure the basic rights of unions and their members.

We believe that the legislation and enactment of the Trade Union Law is a good opportunity for the Cambodian government and employers to rebuild international and domestic confidence in the country’s industrial relations. You, as large buyers have an obligation to contribute to this change.

We are positive about the outcome of this process with your swift and public response on the draft Trade Union Law and look forward to reading you statement.

Appendix I: Comments on the draft Trade Union Law, as sent by International Trade Union Federation (ITUC) on 11 March 2016 to the Cambodian government

Article 3: The proposed TU law excludes various classes of workers by reference to Article 1 of the Labour Law. We would recommend that all workers, including civil servants, should be allowed to form or join a union.

Article 13: The draft law requires the unions’ statues to include provisions governing a strike ballot. We urge further consultation with trade unions to ensure that any threshold set is consistent with Convention 87.

Article 14: The draft law prohibits trade unions from entering into any legal arrangements prior to being registered. The ILO has made clear that the exercise of legitimate trade union activities should not be dependent upon registration.” Unions who have filed for registration should be able to enter into contracts, etc., and to sue if necessary. The law should be clarified so that unions are able able to operate legally during the registration process.

Article 17: While a government may request that an audit is provided for its review, this proposed article goes well beyond that. For example, unions are required to report on all of their activities on an annual basis, which is not consistent with Convention 87. Further, the union should not have to provide details of its bank accounts if it is already supplying an audit from a certified auditor. Also, unions are required to provide information on changes of bank accounts and membership numbers within 15 days. Even extending this to 30 days is unreasonable. It is likely that membership numbers will always be changing, requiring constant updates. Failure to do this would invalidate the registration, pursuant to the procedures in Articles 18 and 19.

Article 24: Under Article 24, “relevant parties” may request an audit of a union. The term “relevant party” is unclear and could allow nearly any individual or group to request such an audit, subjecting unions to harassment and the expense of numerous audits without any legal justification.

Article 29:The dissolution of a trade union should be dealt with according to the provisions of the union’s constitutions and bylaws, not by allowing “any party” or 50%+1 of the members to use the courts to do so. As to the grounds for dissolution, if elected leaders have acted inconsistently with the law, action should be taken against them and should not jeopardize the existence of the union. Also, the law punishes employer domination but does nothing to address the equally large if not bigger problem of government domination of trade unions. If the government is truly worried about the lack of independence of unions, it should also address government/party domination. If the government has evidence that (a) or (b) has been violated, then they should proceed to seek deregistration of the union, with such deregistration taking affect only after all appeals have been exhausted.

Penalties: Employer sanctions under the law are for too low to be dissuasive. For nearly all violations, the maximum fine is 5 million riels (1 million riels = US $250/Euros 233). Thus, the maximum fine permitted is a mere $1,250. The majority of employers will simply pay the small fine as the cost of doing business, assuming the government attempts to collect it in the first place.