by mirjam — last modified 2015-10-19 15:19
Turkish workers for the handbag brand Mulberry, and activists globally who supported their cause, are hailing a 'tremendous victory' after winning a campaign to uphold human rights in their factory. 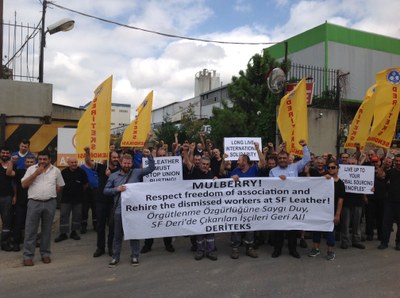 A meeting on Friday between factory management and workers ended a nine month union busting dispute, where it was agreed that court cases against the union would be dropped and full compensation paid to all workers involved.

Workers at SF Leather, a Turkish supplier of handbags and purses for the British luxury brand Mulberry, had been calling for their human rights to be respected after management fired workers who had joined the fledgling union Deriteks Sendika. The management subsequently attempted to sue them on trumped up charges, and only offered to rehire them if they gave up union membership.

The nine month campaign culminated in actions held outside stores and factories around the world including Istanbul, Hong Kong, Copenhagen, Bristol, New York, Bangalore and others, in partnership with the Clean Clothes Campaign and the Union League. More than 11.000 people signed an international petition to the brand Mulberry.

“The real victors are the fourteen workers who held a round-the-clock protest to call for their jobs back and their human right to organize a union. This victory shows that where international struggles link, we can work to protect our human rights and improve working conditions in factories around the world,” said Abdulhalim Demir from Clean Clothes Campaign Turkey.

"According to the agreement SF Leather is now obligated to act in accordance with ILO convention no. 87 and 98. We will follow this agreement as well. It is most important that SF Leather respects workers' right to organize a union," said Engin Çelik says from Deriteks.

A meeting of the union was held inside the factory this week, where union officials were allowed to meet with all the workforce to educate workers on their rights. This stands in sharp comparison to events one year ago where management told workers, in contradiction to international human rights standards, that they would never allow a union into the factory.

SF Leather is based in Izmir, Turkey, and employs 190 workers. 90% of the factory's production is for British handbag and purse brand Mulberry.