10 ways H&M is spinning the facts on worker safety

by mirjam — last modified 2015-10-19 12:29
H&M's response to CCC's recent report 'Evaluation of H&M Compliance with Safety Action Plans for Strategic Suppliers in Bangladesh 2015', focusing on H&M's worker safety failures in Bangladesh is replete with false and misleading statements, demonstrating that the company remains unwilling to address the issue in a serious and forthright manner. In this news update, we explore various claims made by H&M, concerning our report and concerning the delays in safety renovations at its supplier factories in Bangladesh, relative to the deadlines imposed by the Accord on Fire and Building Safety. 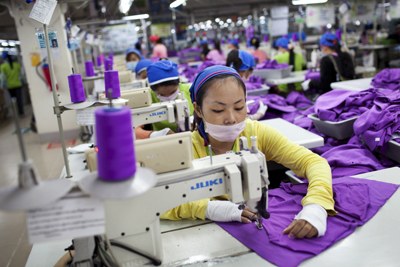 It is important to note that H&M, amidst the various efforts at obfuscation discussed below, acknowledges the veracity of our central conclusion: that there are major delays in safety renovations at its supplier factories in Bangladesh. The company can hardly deny this, since the Accord's public reports, on which our analysis was based, make this painfully clear. Unfortunately, what H&M fails to do is offer any credible assurances that it intends to do anything differently going forward.

H&M states: "[W]e are only producing in factories that meet the Accord requirements for operation..."

According to the Accord's published reports, there is not a single H&M supplier factory in Bangladesh that meets the building safety standards of the Accord. H&M is well aware of the contents of the Accord standard. H&M is equally well aware that none of its supplier factories, at this juncture, are in full compliance with this standard (a fact the company itself acknowledges elsewhere in the same statement in which this claim appears). H&M is further aware that most of its supplier factories have failed to meet deadlines established by the Accord for completing the renovations needed to come into compliance. H&M therefore must not mean, in making the statement above, that its suppliers meet Accord building safety requirements -- though this is what most people who see the statement will understand it to mean.

We presume that H&M, in making this claim, is referring instead to the fact that the factories it is using, though clearly unsafe, have not been ordered to shut down due to risk of imminent structural collapse. Under the Accord program, non-compliant factories are allowed to continue to operate, while they undertake the safety renovations necessary to come into compliance with the Accord standard, except in cases where the danger is so extreme as to demand immediate evacuation. In this narrow sense, virtually all factories (save those actually ordered to close) can be said to meet "Accord requirements for operation," which means only that these factories are not going to fall down tomorrow.

H&M fails to explain any of this, clearly intending people not intimately familiar with Accord terminology (i.e., the public) to glean from its statement that all of H&M's supplier factories in Bangladesh are operating safely - even though none of these factories meet the Accord's safety code and even though most of them have missed the Accord's deadlines for safety improvements. Indeed, because of H&M's foot dragging, deadly hazards remain present and uncorrected in virtually all of these facilities.

H&M's claim that all of its supplier factories have emergency exits is an outright falsehood. Prior to the advent of the Accord, which H&M signed under massive international pressure in the wake of the Rana Plaza catastrophe, virtually none of H&M's suppliers in Bangladesh had fire exits - a term that refers to a system of enclosed stairwells, protected by fire doors, that enable workers to safely escape a burning building (the most common emergency in Bangladesh). By definition, any building that does not have enclosed stairwells, protected by fire-rated doors, does not have fire exits (or emergency exits, to use H&M's terminology). As H&M admits, more than two years after it signed the Bangladesh Accord, "some" (actually, most) of its supplier factories still lack proper fire doors, and therefore do not have fire exits.

The only way H&M's statement makes sense is if the company is redefining the term "fire exit" to refer to any building that has doors. H&M's supplier factories all have doors; this is true. The problem is that the doors that lead outside are not connected to an interior system of protected stairwells and fire-rated doors that would give workers safe passage in a fire. When workers do not have safe passage so they can actually get to the exterior doors, then the exterior doors are useless.

This is why merely having doors doesn't mean you have fire exits.

Should a major fire occur in an H&M supplier factory, requiring emergency evacuation, the lack of proper fire doors would lead to stairwells becoming inundated with smoke and thereby possibly rendered impassable for workers trying to escape the fire. Improperly protected exit stairwells have been the primary factor in virtually all mass fatality fires in Bangladesh. Until the required fire-rated doors are installed in a factory, along with related upgrades needed to fully protect exit stairwells, the factory is not safe.

H&M states: "Fire exits are one of the most fundamental requirements for a supplier in order to be allowed to produce for H&M."

Clearly, fire exits are not a fundamental requirement for H&M suppliers. As noted above, the majority of H&M's top tier suppliers in Bangladesh do not have fire exits. Yet all of these suppliers continue to produce for H&M. Indeed, as documented in our report, there are 78,842 people working in these buildings.

H&M states: "Where H&M is lead-brand, almost 60 percent of the remediation work is completed and we see good progress."

Our report focused on H&M's top tier "gold" and "platinum" suppliers, not the factories where it is the "lead brand" (an internal Accord designation), but this claim is worth assessing anyway. What H&M is saying is that more than 40% of the safety renovations mandated by the Accord have not been carried out in the factories where H&M has the lead role in overseeing these renovations. It is crucial to bear in mind that most of these factories were inspected more than a year ago, which means that most of the required renovations had deadlines for completion that have long since expired. By now, close to 100% of hazards should have been corrected - not 50%, or 60%, or 70%. Any one of these uncorrected hazards could cause injury or death.

H&M states: "[I]t is correct that we and the other buyers within the Accord are experiencing some delays to work being carried out to initial timelines...there have been problems with deliveries of new upgraded fire doors and sprinklers due to import delays since none of these products are available in Bangladesh."

This reason for delay had some validity in the months immediately after factories were inspected; it cannot, at this late date, explain either the length or breadth of the renovations delays at H&M supplier factories. Fire doors and other specialized items needed to complete safety renovations are readily available from companies around the world that are perfectly happy to export to Bangladesh. If obtaining this equipment were a genuine priority for a company like H&M, all of the necessary items would have long since been procured.

H&M is a $20 billion corporation with a massive global sourcing operation, involving more than a thousand factories, located in dozens of countries, producing goods for more than 3,500 retail stores. H&M's success depends on its ability to move hundreds of millions of units of product around the world, swiftly and efficiently, and the company prides itself on its accomplishments in this regard. In Bangladesh, it employs more than 600 staff to handle the logistics of production, including the movement of goods. How plausible is it that H&M is incapable of getting a few thousand fire doors into Bangladesh in the space of two and a half years?

Given the number of lives that are at stake, it is appalling that H&M, two and a half years after the Rana Plaza collapse, and five years after 21 workers died in an H&M supplier factory, is blaming the absence of life-saving fire safety equipment in its supplier factories on logistical problems that could have been resolved in a matter of months.

H&M states: "It has to do with doors that have been lockable but they haven't been locked. Also in this case it's a matter of old doors that will be replaced with newer ones, but it hasn't yet been done."

H&M has no way of knowing whether exit doors in its supplier factories are being locked during the workday, since it does not have inspectors in the factories on most days. This is why the Accord requires that lockable doors be removed entirely and replaced by doors that can always be opened from the inside. This is the only way to know for sure that reckless factory managers are not locking doors, as has been a common practice in Bangladesh.

H&M is well aware that factory owners will lock doors even though doing so is against national law and customers' labor codes. Locked doors were a major cause of the 21 deaths at the Garib & Garib factory in 2010 (an H&M supplier), at a time when H&M required that doors be left open during the workday.

The removal of lockable doors is an easy renovation to complete. The Accord mandated that it be done within a few weeks after each factory's inspection. Yet there are numerous H&M suppliers that have still not removed lockable doors, more than a year after inspection.

H&M states: "Delays are also due to heavy workload for the Accord inspection experts dealing with these complex issues."

This claim is false. The renovation delays at H&M supplier factories documented in our report cannot be attributed to the Accord's inspectors. The Accord's inspectors use follow up inspections to verify reports from factory owners and brands that renovations have been completed. Our analysis looked only at whether or not a given renovation has been reported as complete, not whether it has been verified by the Accord. We thus gave H&M the benefit of the doubt in taking factory managers at their word.

Finally, it should be noted that H&M's statements feature a number of platitudes, along the lines of the following: "We are very committed to ensure that we do all that we can in support of timely and correct remediation..." Such assertions defy substantive analysis. The public will have to judge, based on the factual information available, whether H&M is, or is not, "very committed" to making its supplier factories in Bangladesh safe.

[1] All quotes, except the last two, are from statements posted by H&M, on its corporate website, on October 2 and October 8, 2015. The final two quotes are translations of statements by H&M press secretary Camilla Emilsson-Falk as made to Svenska Dagbladet and reported on October 2.