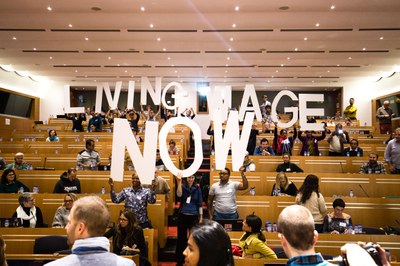 At the forum, organised by Clean Clothes Campaign and held between 12 and 14 October, more than 250 workers, brands, policy makers and campaigners came together to commit to implement a living wage for all garment workers.

During the forum speakers agreed on the fact that policies based on voluntary codes of conduct and pilot projects so far taken up by brand and retailers have made little to no difference. Clean Clothes Campaign insists that a structural, binding approach is needed, such as the Bangladesh Safety Accord and the Freedom of Association Protocol in Indonesia. These international agreements are ground breaking because they address the root causes: safety in factories for the Accord, freedom of association in the Protocol. The first was signed after the Rana Plaza disaster which caused 1138 to loose their lives on April 24, 2013. Jean Marc Caudron  from Clean Clothes Campaign: “Will the brands and the EU wait for the next disaster before other binding measures emerge? Binding agreements are the single tool to define and impose rules on brands.”

According to Jean-Marc Caudron, the EU Commission can and should also quickly improve legislation on transparency in the garment sector. Jean Marc Caudron: "After the disaster of Rana Plaza, it was impossible to get a client list of European brand buying from the factories in the building. It took digging through the rubble by hand to retrieve the labels and identify European brands. This is a disgrace for brands talking about any sort of accountibility for the business they do. Today, the EU reviews its directive on the safety and traceability of products. The opportunity exists to make the publication of sourcing factories of the products sold on the European market compulsory."

The extremely low wages in the garment sector in Europe were also subject of debate. For example in Georgia, garment workers take home a mere 114 euros per month, just 10% of a living wage.

The Asia Floor Wage believes that brands should partly fund this increase both in Europe and in South East Asia, since it is they who appropriate most of the value of the products made by the women and men working in the garment factories and the rest of the garment supply chain.

Jean Marc Caudron: "A number of companies have promised to pay a living wage to the women and men stitching their clothes. Others have put steps to ensure that workers' rights are protected in the supply chain. This has not resulted in a living wage for garment workers, and we will not rest until this becomes a reality. "