by mirjam — last modified 2015-10-22 10:45
Clean Clothes Campaign urges the Cambodian government not to pass the Trade Union Law unless genuine and inclusive consultation with civil society and trade unions can be garantueed by the government of Cambodia. 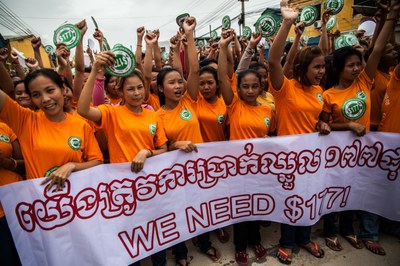 Parts of the draft trade union law are not in compliance with ILO conventions 87 (Freedom of association and protection of the right to organize) and 98 (Right to organize and collective bargaining), both ratified by Cambodia, trade unions have commented. Allegedly, the draft also proposes a transfer of power from the court system to a Labour Inspector, foreseen to decide whether a strike is illegal and what legal consequences it would imply.

“The Draft Law poses a direct threat towards the fundamental rights that are enshrined in various international conventions and treaties including those signed and ratified by the Cambodian government, says Carin Leffler from Clean Clothes Campaign. «It is crucial that big buyers like H&M, Zara, Gap, adidas and Puma speak up for worker’s rights. They should send a clear and univocal message to the the Cambodian government and the Garment Manufacturers Association in Cambodia (GMAC) that future orders are dependent on a new trade union law in compliance with international standards.»

One of the articles in the Draft Law grants the government powers to suspend the union if its actions do not meet with the government’s approval, like strikes.

Says Ath Thorn,  president of the Coalition of Cambodian Apparel Workers’ Democratic Union (C.CAWDU): “Cambodia, which already has a track record of labour violations, must not digress further by passing the Trade Union Law as currently drafted. Even with the recent changes, the law as currently proposed, will make it harder for workers to unionize and will hinder the struggle for fair living wages and just working conditions. Therefore, we demand that the government make the current draft of the law public, incorporate the changes proposed by the trade unions and engage us in further consultation.”

The Cambodian garment industry employs around 700.000 people, mostly women, and bring clothing to millions of consumers globally. During the wage protests in January last year union members and representatives were severely harassed and discriminated. The military violence on January 2 and 3 killed at least 4 people and almost 40 were injured.