Join thousands in the call for a living wage

by mirjam — last modified 2015-08-06 13:33
While the summer sale is in full swing in cities around the world, Clean Clothes Campaign raises attention on the ‘manufacturing defects’ of clothes with the launch of the Living Wage Defect website. People can sign the petition for a living wage for garment workers and can symbolically send back a garment due to its living wage defect to fashion brands. 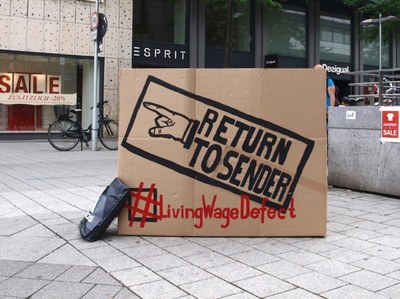 In Asia as well as in Europe, garment workers in the global fashion industry struggle to make ends meet on their salaries. Mirjam van Heugten, Clean Clothes coordinator says: “With the current low national minimum wages, workers are stuck in a life of poverty, without a way to offer their children a better future. Brands have talked about a living wage for years, but we have not seen improvements for workers.”

In the majority of the cases, garment workers only earn 20% to 30 % of a living wage. “If our clothes had 80% or 70% missing, we would send them back. We invite consumer to do the same thing at the Living Wage Defect website and to symbolically send back a garment due to its ‘living wage defect’”, says Mirjam van Heugten.

In the last two years, more than 110,000 European citizens have signed the petition for a living wage of garment workers. The petition will be handed to the brands and political representatives at the Living Wage Now Forum in October 2015 in Brussels. Today, the Clean Clothes Campaign is starting the countdown to this Forum with the launch of the Living Wage Defect website.  Mirjam van Heugten says: “We want to remind the brands that they are responsible for the implementation of a living wage for garment workers in their whole supply chain.”

From 2013, the Clean Clothes Campaign network has been working intensively to support the struggle of garment workers for a Living Wage, bringing the voices of garment workers to the fore, strengthening workers’ organisations and supporting the emergence of Asian-led strategies such as the Asia Floor Wage Alliance. It is an innovative regional initiative for higher wages in a global industry led by trade unions, workers’ rights and human rights organisations.

In Europe, the Clean Clothes Campaign network has contributed to raising awareness among European citizens, to pushing companies to take credible steps and lobbying policy decision makers to develop initiatives and build a framework to respect and promote the right to a living wage for garment workers.

The campaign has been leading up to the Living Wage Now Forum. During the Forum, which takes place from 12th to 14th October 2015 in Brussels, the Clean Clothes Campaign will call on brands and European decision makers to discuss the concrete next steps towards a fashion industry that respects human rights.