by mirjam — last modified 2015-05-19 14:50
Clean Clothes Campaign calls on the government of the Philipines to carry out a full and detailed investigation into the circumstances surrounding a fire at a Manila slipper factory, which killed at least 72 workers on May 13th 2015. 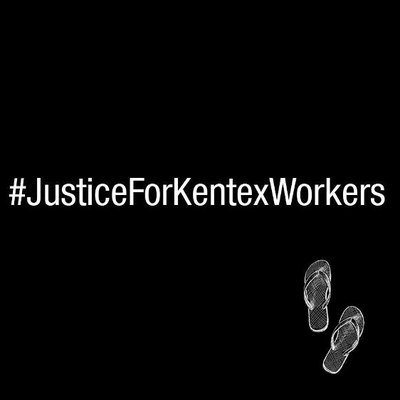 The fire, which is believed to be the worst factory fire to hit the Philippines, broke out after sparks from welding equipment, being used to fix an outside roller door, came into contact with highly flammable chamicals, which were stored nearby. Workers were trapped on the second floor of the building, unable to escape from windows that were covered in bars and chicken wire. The heat of the fire made identification of bodies exttremely difficult and at least 20 workers remain unaccounted for.

The factory, Kentex Manufacturing Incorporated, was located in Valenzuela City and was producing rubber slippers for sale and distribution in the Philippines.

The families of the victims of factory fire in the Philippines have formed the Justice for Kentex Workers Alliance, and are resolved to fight for their loved ones.

CCC is also demanding that the government prosecute those responsible for the deaths and provide full compensation to the families of those killed and injured. Finally, CCC supports calls from labour rights groups for the government to compel factory inspections to be carried out by qualified inspectors independent from the industry itself.

Mirjam van Heugten from Clean Clothes Campaign says: 'These lives could have been saved. Had Kentex been subject to an independent and transparent inspection, if it had allowed a strong independent trade union to operate in the factory, these workers would still be alive. The government must carry out an immediate investigation of the causes of the fire and prosecute those whose negligence has caused the death of so manywomen and men.'

Immediatley after the fire Labour Secretary, Rosalinda Baldoz, claimed that the factory passed an inspection on compliance with general labor standards and occupational health and safety standards that was conducted by the Department of
Labor and Employment (DOLE) on September 2014.  The Bureau of Fire
Protection reportedly also gave the factory a fire safety inspection
certification. Yet a fact-finding team composed of labour NGOs who visited the area on May 14, found serious violations of occupational health and safety standards, many of which contributed to both the cause of the fire and the high death toll.

The fact finding mission found that the unsafe storage of chemicals and lack of proper labeling on their containers meant that workers were unaware that the containers were flammable or how to douse the fire when it broke out, the lack of adequate fire alarms and no emergency drills or training for workers meant workers were unaware of the fire or how to escape it, and the absence of adequate fire exits meant that even once the scale of the fire was known people were trapped with no means of escape. All of these finding represent direct violations to existing safety legislation, and should have been discovered had the fire and safety inspections had been properly carried out.

You can support the families of the injured and deceased by sending a message on their facebook page here and by using the hastag #JusticeForKentexWorkers.