by mirjam — last modified 2014-12-18 11:18
In 2012, the Thailand Textile Institute (THTI) set out an ambitious 300 million THB (7.29 million EURi) plan to develop the national textile and garment industry over four years, with the aim of transforming Thailand into Southeast Asia's fashion centreii. The focal point of garment production is located in Mae Sot, Tak Province, roughly 500km northwest of Bangkok on the border with Myanmar. 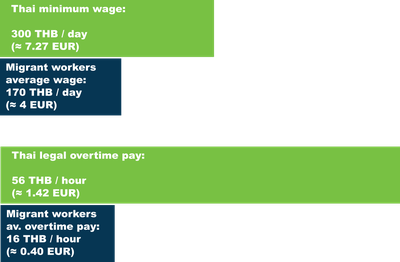 By focusing production in border towns, such as Mae Sot, the garment industry aims to reduce production costs by hiring migrant workers, who are seen as desperate and therefore easily exploited, at below the prevailing minimum wage.

As of 2014, it is estimated that there are between 3-4 million migrants working in Thailand’s labour-intensive industries, including seafood processing and fisheries, construction, agriculture, domestic work, and manufacturing sectors such as textiles and garments.
The total number of migrants estimated to be working in the Mae Sot area is between 200,000 - 300,000iii, with 60,000-80,000 estimated to be working in knitting and garment factoriesiv. It is possible that 70 percent of garment factory workers could be womenv.
The numbers of migrants registered in this area is low with wide fluctuations. In 2008, there were 25,000 migrants registered in Tak Province (the province where Mae Sot is located)vi; while in 2012, the total number of migrants registered in the province was 35,984 (of which, 23,062 were women)vii. In 2013, only 9,700 migrants were registered with temporary passports and work permits.

There is no clear, long-range migration policy in Thailand. However, since the initiation of migrant management policies, the type of document, the process for obtaining these documents and relevant fees have changed regularly over time. Unfortunately, the changes to migrant policy have not addressed issues of improving migrants’ rights.
In practice, the overall process of becoming legally registered includes registering for a temporary passport, work permit, visa, and healthcare, and should only cost around 4,000 THB (97 EUR) for migrants entering the NV system, but in reality costs migrants around 10,000-12,000 THB (242-291 EUR).
Those entering through the MOU from their home countries pay even more, close to 25,000 THB (606 EUR). Migrant workers cannot afford this amount upfront, so they often repay the fees to the employer through deductions of their wages, typically anywhere from 500-1000 THB (12-24 EUR) per month, often without proper record keeping which results in overpayment that is never reimbursed.
Not being able to hold their own documents makes it dangerous for workers to venture outside the factory premises. They are particularly vulnerable to extortion by local police. Workers found without their permits, even if they have a photocopy on hand, usually must pay a bribe. Those who are not able to pay the bribe may be taken to jail. If the employer cannot be reached or fails to show any registration on behalf of the worker, the worker can be deported.

MAP staff and volunteers interviewed 58 migrant workers (32 women and 26 men) working in garment factories in the Mae Sot region during February 2014.
Pay is well below the minimum wage and work hours often exceed 12 hours during peak periods in Mae Sot. Workers who live in factory dorms are not allowed to leave the factory compounds or are unable to because they lack proper documents.
Also contributing to the environment of exploitation is the fact that a large proportion of factories in Mae Sot are sub-subcontractors for factories in central Thailand. In fact, none of the garment factory workers interviewed for this report knew which brands they were producing garments for.

The fees for health insurance have stayed relatively static for a number of years but have recently fluctuated. As of 2014, adult migrants pay 500 THB (12 EUR) for the required medical examination, and 1,600 THB (39 EUR) for a full year of health insurance coverage (there are also 3 and 6 month plans available for seasonal workers), coming to a total of 2,100 THB (51 EUR).
All workers interviewed were properly documented and therefore legally eligible for Social Security. Yet over 90 percent said that they either had absolutely no idea whether they qualified for Social Security, or said that they had not been able to access the Social Security system because their employers did not enrol them.
Only nine workers (16 percent) said that they were contributing monthly to Social Security and only one (2 percent) indicated using the Social Security card for health services. In at least three cases, migrants were required to contribute 4 percent of their salaries to Social Security (under a temporary measure the percentage was reduced from 5 to 4 percent) while also paying 1900 THB (46 EUR) to enter into a one-year migrant health insurance plan (during one of the recent price fluctuations). Essentially, these migrants were paying twice for health benefits, provided that the time of coverage overlapped.

In January 2013, Thailand raised its minimum wage nationwide to 300 THB (7.27 EUR) a dayviii. The new system, introduced by then-Prime Minister Yingluck Shinawatra to fulfil part of her 2011 election campaign, raised the minimum wage across the country to a single standard. Previously, each province in Thailand set its own minimum wage according to the stage of local economic development or average living costs.ix
Supposedly, the minimum wage applies to every worker, regardless of age, sex, industry, or nationality. Employers convicted of failing to pay the minimum wage supposedly face six months in jail and/or a 100,000 THB (2,423 EUR) finex. The reality is that a significant portion of migrant workers never receive the minimum wagexi
Although migrant workers are currently entitled to the minimum wage they are typically paid between 150-180 THB (3.6-4.36 EUR) per day. This is, according to interviews by MAP, in contrast to the few Thai nationals working in garment factories who reportedly receive the legal minimum wage.
Workers are also commonly required to work overtime. On average, migrants work almost 11 hours a day, and sometimes between 12-16 hours during peak periods or deadlines. Yet, they only receive on average approximately 16 THB (0.40 EUR) per hour or lessxii, when legally they should be receiving 56 THB (1.42 EUR) per hour.
Out of the 58 different migrant workers interviewed, only one person (2 percent) was receiving the daily minimum wage. This person worked at a knitting factory. There were six individuals (10 percent) who were paid per every dozen articles that they made, and three of these individuals occasionally made the minimum wage - if they were productive enough. This means that 88 percent of the workers surveyed never brought home the minimum wage. Rather, the average daily take-home wage was approximately 170 THB (4 EUR).
One person, an 18 year-old female, was paid as low as 100 THB (2.4 EUR) per day, and another was paid only 120 THB (2.9 EUR) per day. The garment factory workers were working, on average, close to 11 hours per day, and the majority did not get paid for overtime. Those who did get paid for overtime were receiving between 7 to 25 THB (0.17- 0.60 EUR) an hour. Section 61 of the Thai Labour Protection Act puts the overtime rate at 1.5 the hourly amount, meaning they should be receiving at least 56 THB (1.42 EUR) per hour.

Each month workers are subjected to pay deductions for accommodations, electricity, water, and food (typically plain rice, for which they must then purchase their own curries). These total deductions may range from 200-2,500 THB (4.8 – 60.5 EUR) per month / per person – or up to 100 THB (2.4 EUR) per day. In many cases, this is in addition to the 500-1,000 THB ( 12– 24 EUR) per month being deducted from migrants who are still paying back their employer for the fronted fees for registration documents such as passport and work permit.

On average, the 58 individuals interviewed in Mae Sot had been working at their factories for 3 years, 25 (43 percent) stated they had signed contracts with their employers, specifying the amount of time for which they have been hiredxiii. Six of these individuals had agreed to work one year; the other 19 had agreed to two-year terms. None of them had copies of the contracts to show. At least 10 of the 25 (40 percent) stated that their bosses kept the contracts and that they were not given a copy.

The Thai labour force is largely non-unionized, with less than four percent (3.7 percent) or around 330,000 Thai workers being members of trade unionsxiv.
Not coincidentally, migrant workers lack the legal right to form trade unions and cannot hold leadership roles in unions.
As testimony to the agency migrant workers can muster when they organize, there is a history of cases of wild cat strikes and other actions where migrants have successfully negotiated for improved conditions or pay with their employer. The problem is that these often result in temporary and miniscule
gains as compared to being fully recognized and protected under labour laws.