by mirjam — last modified 2015-05-11 13:03
Shoe company Bata refuses to take any responsibility for the resolution of a labour rights conflict arising at the factory Palla & Co., a Sri Lankan shoe factory. Workers say its owner repeatedly refused to pay workers an agreed upon pay rise. Bata, who was sourcing from the factory at the time of the labour conflict, cut its commercial relationship with Palla & Co. in late 2013. 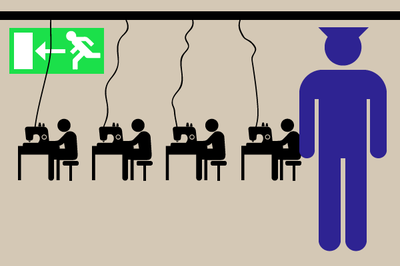 CCC and global union IndustriALL denounce Bata for not taking any credible action to mitigate the adverse human rights impacts despite recognizing that the actions of the factory management are a violation of their own code of conduct.

In the Sri Lankan factory Palla &Co, workers produced footwear for the shoe giant Bata. After the reported refusal of the local management to pay half-yearly salary increments in 2012, workers organised in a factory-level union. However, the management refused to engage in negotiations. Following subsequent workers’ protests, the factory management suspended 15 union officials in November 2013 and dismissed 179 union members in December 2013. Today, 92 workers and 12 unionists are still fighting for reinstatement.

The labor rights dispute arose in August 2012 when production at Palla & Co. was mostly for Bata. Bata, originally a Czech family-owned enterprise, is now headquartered in Switzerland. According to Bata, more than 210 million people in more than 60 countries are wearing Bata shoes at any given point in time – some of which were produced by the workers at Palla & Co.

The dismissed workers are still facing severe problems to find other jobs because almost all other workplaces refuse to take them. The management of Palla & Co allegedly spoke to other factories’ management and asked them not to recruit their former workers.

A former worker of Palla said about her situation since the dismissal: “I have no husband, as my husband has left. I have two children. I am in a rented house. Actually I do not have the money to pay the rent for my house. It is difficult to find another job in another factory. I need to go back to work.”

85 out of the 179 dismissed workers were reinstated by Palla & Co. However, the catch was that they had to sign an agreement with Palla & Co. stating that they would not participate in any trade union activities in the future. Bata, this is where the shoe pinches.

The local union and the Clean Clothes Campaign are urging Bata to get active and meaningfully engage in the resolution of the labour rights conflict.

Want to tell Bata to act? Go to IndustriALL's webiste and send a letter to Bata.