Two years after fatal fire - KIK still has to pay up

by emma — last modified 2014-09-11 10:53
September 11th marks two years since the fatal fire that killed 254 garment workers at a factory in Karachi, Pakistan. German retailer KIK were the only confirmed buyer from the factory, and yet today the victims families are still waiting for the retailer to pay full and fair compensation. 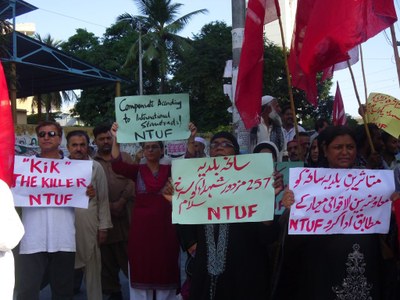 Just weeks before the fire, the factory was audited on behalf of Italian social audit firm RINA for SAI (Social Accountability International) 8000 certification – and passed – even though it had no emergency exits, barred windows, was not registered and had an entire illegal mezzanine floor built on.

The survivors and victims families fate is shared with the families of more than 1,300 garment workers who have been killed in unsafe workplaces in Asia since the Ali Enterprises fire, and the thousands more who survived fires and building collapses but whose lives have been changed forever.

German retailer KiK had clothes produced in each of the three factories to witness the greatest loss of life – Ali Enterprises, Tazreen Fashions and Rana Plaza - and yet to date has failed to provide full and fair compensation for all the victims.

In December 2012 KIK, the only known buyer at Ali Enterprises factory, signed a memorandum of understanding with the Pakistan Institute of Labour Education and Research (PILER) committing an initial US$1 million for immediate relief and agreeing to negotiations surrounding the amount required to pay compensation.  However the negotiation is being delayed by KiK, who most recently pulled out at the last minute of planned negotiations in July and compensation remains unpaid.

As workers and campaigners around the world hold candlelight vigils and actions to commemorate those who died in the fire, Clean Clothes Campaign renews it's call to KiK to resume negotiations based on the legally binding agreement with PILER, and pay up,  ensuring all the victims families and survivors receive the compensation they are owed before another year passes.

Read more about the case here.