by mirjam — last modified 2014-07-29 10:00
We are pleased to announce that the Sri Lankan Free Trade Zone and General Services Employees Union (FTZ&GSEU) reached a settlement with the underwear factory Bratex and the US based company Fruit of the Loom. 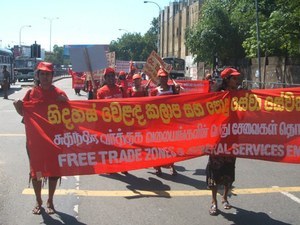 The union was demanding the reinstatement of workers, compensation for wages as well as the guarantee that the right to freedom of association is respected by the employer, and criminal charges against the workers to be withdrawn. Anton Marcus, general secretary of the FTZ&GSEU says: “We are pleased to announce that we have reached this agreement with Bratex and Fruit of the Loom settling all the outstanding issues between the parties. We look forward to a new beginning and positive dialogue between labor and management in the future.”

The settlement follows a three year struggle with the factory owner. In 2011, 31 trade union office bearers and activists were dismissed for their participation in a strike to get union rights and payment of due wages. The FTZ&GSEU branch union activists were accused of assaulting the management, but there is no evidence to link the particular workers that were accused to the attack. However, criminal court cases were pending over the workers, and they were left without jobs and with no fair procedures being followed. Investigations by the Fair Labor Association (FLA) led to no results. The FLA is an American Multi-Stakeholder Initiative of which Fruit of the Loom is a member.

Buyer Fruit of the Loom has played a positive role in encouraging and being part of the settlement.

Although we rejoice the end of the long period of injustice and uncertainty for the Bratex unionists, it is clear that this settlement could have and should have occurred long ago. The failure of the Fair Labor Association and the brands sourcing from Bratex to act sooner caused unnecessary hardship for the workers.