Governments call on brands to pay up 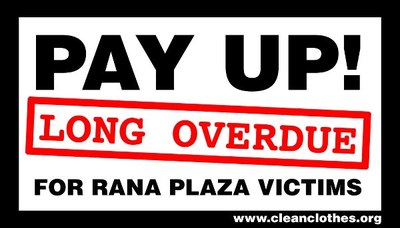 The following statement is in response to the final statement on compensation Rana Plaza victims that you can read here.

"These governments have taken political responsibility where companies have failed to act, which is a significant step in getting compensation for all victims" says Ineke Zeldenrust, of Clean Clothes Campaign, "it is not acceptable that 428 days since the collapse of Rana Plaza the Donor Trust Fund is still lacking US$23 million.  Brands can no longer look for excuses, they must pay up."

The statement is released as Ministers from around the world meet in Paris, alongside the International Labour Organisation (ILO), and representatives of trade unions and NGOs, at the Organisation for Economic Cooperation and Development (OECD) Global Forum on Responsible Business Conduct.

The ILO and UNI Global Union, alongside Clean Clothes Campaign, have expressed deep concern that the fund is still running short of the much needed funds, and whilst the Forum looks at ways to improve responsible business in the future the governmental statement highlights the fact that "the lack of compensation for the victims weaken[s] the improvements realized up to now in Bangladesh."

The statement is important as it reminds brands globally of their responsibilities to provide adequate redress to those injured or killed in the building collapse according to the UN Guiding Principles on Business and Human Rights. Since the ILO announced the Rana Plaza Donor Trust Fund only US$17 million has been contributed, in spite of the estimated US$40 million that is needed to ensure all those affected receive full compensation.

The Donor Trust Fund is the only legitimate way to ensure all those affected receive adequate compensation for loss of income and medical expenses.  Many brands have tried to avoid responsibility by making small and undisclosed contributions to charitable schemes that fail to recognise that compensation is a right not charity.

Governments are calling on "all companies ...[to] donate generously to the Trust Fund, either for the first time or with a second contribution to come to an appropriate amount."

"The combined profits of the 29 brands that have been directly linked to Rana Plaza is well in excess of US$22 billion a year," adds Ms. Zeldenrust, "they are being asked to contribute less that 0.2% of these profits to go some way towards compensating the people their profits are built on."

As the statement was released UK Secretary of State for International Development, Alan Duncan, announced he has written to all UK brands associated with Rana Plaza calling on them to make immediate and significant payments into the Trust Fund.  "We welcome the leadership shown by these governments and hope that the other Ministers will follow Mr. Duncan's lead and contact the brands headquartered in their countries and demand they make immediate payments," says Ms. Zeldenrust.

As Minister Lilianne Ploumen, of the Netherlands, said in the opening panel of today's OECD Global Forum on Responsible Business Conduct, businesses must not "cut and run" it is time for them to take responsibility.

You can read the full text of Minister Ploumen's opening address here.