by mirjam — last modified 2014-06-24 05:57
After a two-day public hearing, the jury of the People's Tribunal to assess human rights abuses faced by workers in the Indonesian garment industry, announced its verdict today. Judges found overwhelming evidence of ‘systematic violation of the fundamental right to a life lived with human dignity' in an industry employing mostly women and said 'urgent action must be taken' by a variety of stakeholders. 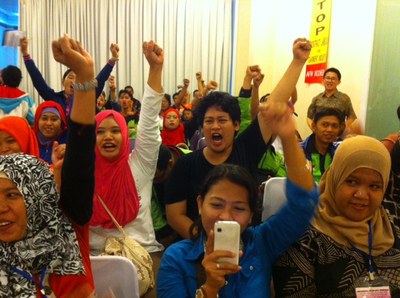 The jury stressed the fact that a living wage and freedom of association are imperative to sustain a global garment industry which respects human rights of garment workers. They acknowledged that 'in recent years some progress has been made in tackling the challenges faced by workers in an industry dominated by a small number of buyers', however they expressed grave concerns for 'the lack of urgency and transparency' among the brands.

Mirjam van Heugten from Clean Clothes Campaign says: “A living wage is the cornerstone of decent working conditions. If garment workers are still living in poverty, which we know they are, no brand can claim that they are truly a sustainable company. The fact that brands have become 'manufacturers without factories', does not mean they can shirk responsibility for the human right violations of the women who stitch their clothes."

The judges described in detail the immediate actions to be taken by global brands and pointed to the fact that a living wage is an enabling human right that must be an inherent part of any sustainable corporate accountability framework. They also expressed great concern for the existing legislation making suspension of the minimum wage a relatively easy process in Indonesia, and 'one that is not uncommon'.

Accompanied by workers’ advocates, expert witnesses from various countries and more than a hundred workers from West Java, Banten and Jakarta, five workers delivered testimonies. These cases related to suspension of minimum wage payments, illegal compulsory overtime, inhuman productivity measures, systematic denial of social security payments, gender discrimination, and active suppression of the right to freedom of association in the industry. All global brands mentioned in the testimonies were invited, such as Nike, GAP and Walmart. Only H&M and adidas were present to respond to the witnesses.

H&M had focused its submission on speaking about their Roadmap to a fair living wage. However, they admitted never having tried to calculate a living wage figure. Adidas' representative caused an uproar among the audience when responding to one of the witnesses by saying 'no factory is perfect'.

The judges were also keen to stress that global brands must acknowledge their complicity in the rights violations described and said that even if they are not directly involved with a company which stitches their clothing, they are still responsible for the conditions in those factories.