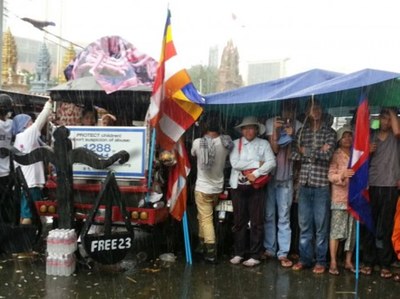 Around 15.30 CET, after two full days of testifying, the arrested strikers left court and are returning to CC1 prison.

After Vorn Pao, President of IDEA (Independent Democracy of Informal Economy Association) and one of the 23 arrested people during the wage strikes in Cambodia, began to give evidence yesterday, the Deputy Prosecutor has repeatedly accused him of playing the victim. Pao replied that that's because he got beaten on the head.

He is not the only one with horrific stories of abuse: yesterday another men arrested on the days of the strike said that military police beat him before making him run to only catch him again and beat him again. He required several stitches on his nose following the beating.

CCC and our partners worldwide continue to stand in solidarity with all those demanding a living wage for garment workers in Cambodia and we demand that the prisoners are released from custody immediately and all charges dropped.