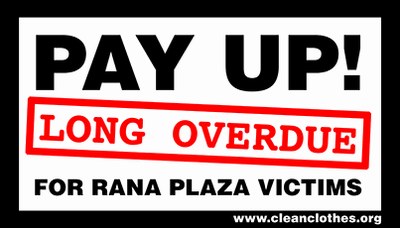 Clean Clothes Campaign welcomes the announcements this week that two more brands have now contributed to the Rana Plaza Donors Trust Fund. Bonmarche (UK) and Camaieu (France) have now confirmed their contributions, which will be used to cover claims for losses made by survivors of the Rana Plaza disaster and by the families of those killed under a process known as the Arrangement.

Camaieu and Bonmarche are among a group of smaller brands that were sourcing from the factories located in the Rana Plaza building. Their contributions prove that any brand, regardless of their size, can play a part in ensuring the victims of Rana Plaza get the justice they deserve.

Bonmarche was one of the original four signatories to the Rana Plaza Arrangement, and is the third of the signatories to pay into the Fund set up as part of that agreement.  El Corte Ingles and Loblaw confirmed contributions last week.

Clean Clothes Campaign has urged fourth signatory Primark to stop delaying their payment, noting that Primark has signed the Arrangement  with the International Labour Organisation (ILO), Bangladeshi Government, Employers groups, and local and national trade unions and NGOs, which commits the company to a single approach to cover the losses of all Rana Plaza victims, in accordance with the ILO conventions.

We welcome the initial contributions from Bonmarche and Camaieu and hope Primark, Benetton and all those brands sourcing from Bangladesh will follow their lead.