by emma — last modified 2021-08-16 14:27
Contributors: d08b7cda0e0e402aaaa29fe1d6e604d6
Clean Clothes Campaign are joining with others around the world in a day of action calling on the Cambodian Government to immediately release the 23 men detained during wage protests at the start of 2014. 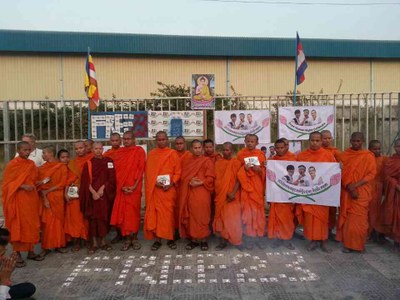 On Monday February 10, campaigners around the world will be taking action in solidarity with Cambodian garment workers calling for the immediate release of the 23 who were detained during last months brutal crackdown on the wage protests.

Garment workers across Cambodia went on strike after the Cambodian Government failed to listen to it's own committees advice and raised the minimum wage to just USD95.  Far lower than the USD 160 workers and trade unions were demanding.

On January 2 and 3 the police and military turned violent and four people were killed, 39 injured and 23 detained.

As Cambodians take action to call for the immediate release of the 23 campaigners and consumers across the world will be joining them outside Embassies and on high streets.

BREAKING NEWS: on Friday February 7th two of the detained have been released on bail.  This is of course welcome news for their families, but we continue to call for the dropping of all charges against them and their fellow detainees.