Less than 200 euros compensation for Kalpona

by mirjam — last modified 2013-11-21 17:49
On 24th November 2012, Kalpona, a garment worker from Bangladesh, jumped from the third floor of the burning Tazreen factory and fell to the ground, breaking her leg. She was rushed to the nearest clinic like many others. She has been waiting for compensation for twelve months and wants to move on. 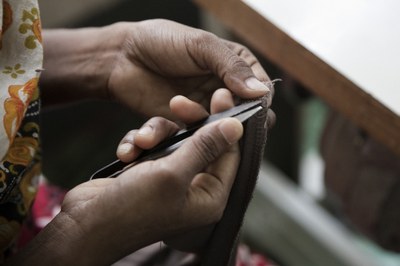 Kalpona (22) lives in a small village of Kurigram District (in the north of Bangladesh). She was born in Kurigram but she did not live with the rest of her family for long because they were too poor to sustain her.

When Kalpona was 16 years old, she moved with her husband to Dhaka to earn a better living and support an aging mother back in the village. In Dhaka, Kalpona gave birth to a baby boy, but two years later, her husband died.

That's when she started working in the Tazreen factory. She sent money to her ill and aging mother and supported her son. She had to leave her son along in the slums of Nischintapur while she was away in the factory. One day she returned home from work and found her son’s arm was broken.

“We worked such long hours in the factory that it was impossible to take a day or even an hour’s break to attend an emergency like this," she says.

The government and the BGMEA (Bangladesh Garments Manufacturers’ and Exporters’ Association) publicly promised that the victims would receive medical and wage compensation, but Kalpona has not received this.

After a few months, Caritas Bangladesh, began disseminating compensation from the brand C&A. Each worker injured in the Tazreen fire received payments for each month lost wages at one grade higher than the grade they worked at. In addition, medical expenses would be paid for via Caritas as well. Kalpona received BDT 8000 (76 Euro), BDT 10,000 (95 Euro), and BDT 2000 (19 Euro) consecutively from Caritas.

The fracture in her leg healed in a few months after continuous therapy and medication. However, her foot still bloats and she suffers from it. She started working in a garment factory once again in June 2013, but could not continue because her foot would swell up, and moved back to her village in July 2013.

"I can't just sit without a job. Who will feed my child? Who will take care of my mother?” she asks.

Her elder sister sometimes supports their mother financially, but her brother could not contribute to the family after he was married. Her mother now supports Kalpona and her son by begging for a living.

Kalpona still waits for the compensation promised by the government, the BGMEA and other brands whose clothes she made when the fire took away her livelihood. With the money she wants to work again to give her 6 year old son a better chance in life.

- This story is made possible with the help of our partner from Research Initiative for Social Equity, Society (RISE) -