by paul — last modified 2013-04-29 13:34
In a monumental victory, Adidas has agreed to compensate 2,800 Indonesian garment workers who were owed US $1.8 million in severance pay following the closure of sportswear factory PT Kizone. 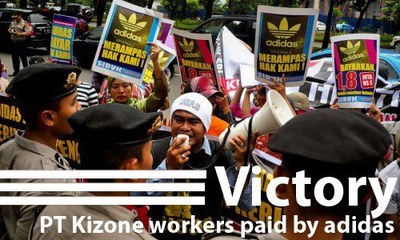 International campaigners and workers have forced German sportswear giant Adidas to settle with workers who have been fighting for the money owed to them since April 2011, when the factory closed down and was declared bankrupt.

While the contents of the agreement remain confidential, the former workers will receive a substantial sum from Adidas. The settlement marks an amazing achievement and the end to an international dispute given Adidas's prior refusal to accept responsibility and pay $1.8 million in legally-owed severance pay.

We are proud to be part of such an agreement," said Aslam Hidayat, former Kizone worker and Coordinator of the PT Kizone workers coordinating committee, "but most of all, we are relieved that our families will be receiving the funds that they need so desperately.”

The campaign, headed by Kizone workers in Indonesia and labour rights activists worldwide, including the Clean Clothes Campaign in Europe, as well as People and Planet, SumOfUs.org and War on Want, featured repeated public actions throughout 2012, calling on Adidas to pay the workers and respect their human rights. In April 2012, on the first anniversary of the severance violations, activists delivered a petition featuring over 50,000 names from around the world. European activists also utilised social media in the campaign, dominating the “adidas originals” facebook page for a week by posting thousands of comments demanding action. University campuses in the UK and USA have held protests and passed student union motions against adidas, as well as twelve US universities severing ties with Adidas.

Mirjam van Heugten from Clean Clothes Campaign says: “The success of this campaign shows the power of worker solidarity and indicates what international consumer pressure can achieve. This case sets a precedent, and is the first time that Adidas has paid severance to workers. There is enormous power when unions, workers and consumers unite, and it's time that global brands take responsibility and respect the human rights of the workers throughout the entirety of their supply chain. As we celebrate this victory alongside PT Kizone workers and activists worldwide, we hope there won't be the need for further campaigns such as this one.”