Call upon Tazreen brands to deliver the goods

by geertjan — last modified 2013-04-29 14:18
Three months after the fire at Tazreen, many families of the 112 dead workers are still waiting for compensation. The majority of the workers with injuries from the flames are also barely able to live from hand to mouth without help. So far the amounts paid by the brands are made up out of whole cloth, they are far from full and fair compensation. 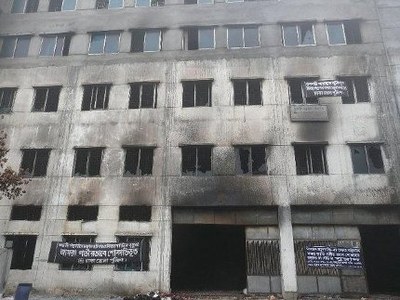 It doesn’t have to be so difficult: within one month after a fire killed eight workers at Smart Export, not far from the Tazreen factory, two brands sourcing from this factory negotiated a compensation package with local unions. They illustrate how brands can very well show their responsibility. Tell the Tazreen buyers C&A, Kik, WalMart and Li&Fung to follow this good example!

Last week, as a result of a meeting with CCC, C&A committed to meet with the Bangladeshi trade unions that support the Tazreen victims. Now it’s time for them, and the other brands involved, to negotiate a full and fair compensation, and to sign the Bangladesh Fire and Building Safety agreement to ensure no more workers will die while making their clothes.

Last month, Inditex and New Look negotiated a compensation package with Bangladeshi trade unions for the families of 8 victims of the fire at Smart Export on January 26th. The agreement is based on international standards and earlier precedent in the Bangladesh garment industry. This package covers general damages and loss of income for injured workers and deceased workers, and educations costs for the children of one of the workers. Each family of the deceased workers receives at minimum 1.049.000 BDT (10.230€).

On February 26th, C&A outlined its compensation proposal for the Tazreen victims. It includes loss of earning and medical costs for injured workers, 100.000 taka  compensation for the deceased workers' families and a monthly stipend for their children until they reach the age of 18. While providing support to a wide range of workers, the proposal fails to involve unions and to follow established best practices. The 100.000 taka compensation  represents only 4% of the total amount needed, and is less than 10% of the contribution expected from the buyers. Thus far, only Li&Fung has provided compensation to a minority of the victims, which did also not exceed this 100.000 taka. Other brands have failed to commit to any compensation at all.

Now that C&A has announced its commitment to meet with the Bangladeshi trade unions, CCC calls upon C&A and the other Tazreen buyers to negotiate a comprehensive and fair compensation package that includes loss of income, pain and suffering, medical treatment and education for orphans.

Since the Tazreen fire, another 28 factory fires have been reported in Bangladesh, injuring at least 591 more workers and killing another eight. The “Fatal Fashion” report, released this March 12th by Somo and the CCC, demonstrates that companies and governments knew about the risks, but failed to take sufficient measures to prevent the fires from happening or to address the needs of the victims afterwards.

To stop these fires from happening, brands sourcing from Bangladesh should join the Bangladesh Fire and Building Safety Agreement, that was already signed last year by the US company PVH Corp (owner of Calvin Klein and Tommy Hilfiger) and the German retailer Tchibo.

Companies like yours should also not linger to take the measures needed to prevent fires from making more victims. The Bangladesh Fire and Building Safety Agreement, developed by Bangladeshi and international trade unions with the support of the Clean Clothes Campaign follows this aim. I hope to receive the news that your company has agreed to sign this agreement as soon as possible.Dear Mr. Chamberlain, Mr. Arretz, Mr. Kamalanathan, Mr. Fung, Mr Reed, Ms. Rubbo, Ms. Fadden, Mr. Tweedy and Ms. Rice

More than 3 months after the deadly fire at Tazreen Fashions, I am very sorry to hear that victims are still awaiting appropriate compensation. I am informed that companies who sourced from Smart Exports, another factory where workers died in a fire in January this year, have negotiated a compensation agreement with the Bangladeshi trade unions. I expect that you will not lag behind, and that you will negotiate with the trade unions full and fair compensation for all the victims of the Tazreen fire on the basis of international standards and best practices in Bangladesh.

No more time should be wasted to avoid new tragedies from happening.