by geertjan — last modified 2013-04-25 13:59
One month after garment workers from the closed Kingsland factory started a vigil they are still out on the streets. Today they called at H&M and the Swedish Embassy in Cambodia. 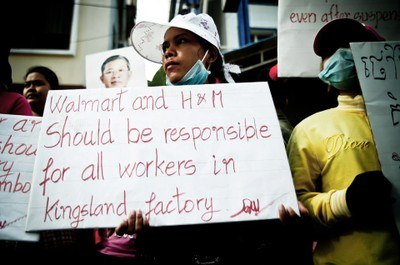 In an attempt to draw H&M’s attention to their grim situation, around seventy workers went to the Phnom Penh Tower this morning - the building in which both the H&M office and Swedish Embassy are located. The workers demanded that the Swedish Embassy support the case and that H&M ensure payment from Kingsland’s owner - or if the circumstances require it - from the brands that sourced from the factory. Staff from the Embassy arrived to accept a petition.

H&M’s local representative, Mr. Basirun Nabi circled the group before approaching a workers’ representative. He requested that local media cease filming the exchange, but assured that the document would make its way to the H&M head office.

A letter was passed on for H&Ms CEO Karl-Johan Persson. Worker’s message to the head of the giant retailer is honest and straight forward: ‘We worked very long hours to avoid insults from supervisors and to get your orders ready in time. Now that we’ve lost our jobs we are broke and some have already lost their homes. H&M says that our work is “unauthorized production”, but we were working for H&M and want you to take responsibility for the situation.'

After a number of temporary suspension orders, Kingsland Garment Cambodia Ltd closed in December last year. All the workers lost their jobs. The factory owes the workers hundreds of thousands of dollars in unpaid wages and benefits.

Since the 3rd of January workers from Kingsland have maintained a camp in front of the factory to hinder managers, if they return, from taking machinery and equipment out of the production unit.

Most of the workers are female, some of them working at the factory since 1997. Some of them are pregnant or elderly and cannot afford enough food or water. During the night, drunk men approach the group, trying to sleep next to them. The women say they are scared and do not get much sleep. Instead of receiving legal severance and indemnity for their years of service, they are now broke and in debt. In spite of the noise and the stony pavement, they return and will stay put until H&M steps in to help.