by geertjan — last modified 2013-04-24 09:51
Last month CCC, Abiti Puliti and Filcams CGIL started a public campaign to call on Original Marines and its supplier, the Indonesian factory PT SC Enterprise to stop the abuse against workers who produce for PT SC Enterprise. 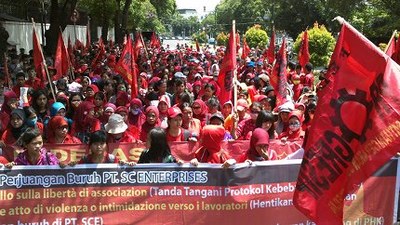 CCC and Filcams CGIL also urged PT SCE to re-hire 42 workers that were illegally dismissed after forming the independent union SP SCE in March last year. Instead of ending this wrongful conduct and re-hiring the dismissed workers, intimidation increased and now also focuses on CCC, Abiti Puliti and Filcams CGIL which have legitimately denounced the case.

The Indonesian company PT SCE, owned by an Italian citizen called Stefano Cavazza, responded to this call for action with more pressure on workers. Workers interviews confirmed that there is still a climate of intimidation and poor working conditions at the factory. If workers do not reach their production targets, they receive wage deductions and overtime is mandatory. The factory owner now also targets CCC supporters via email. Several campaign groups received unacceptable threatening emails from Mr. Cavazza. While PT SCE currently seems eager to communicate, it failed to respond to any of the letters send by CCC and Filcams CGIL before the case went public.

It is important to clarify that CCC and Filcams CGIL do not want to disrupt production or cause harm to the factory, as this does not benefit workers. CCC has made extensive efforts to communicate constructively behind the scenes with both Original Marines and PT SCE. Since July 2012, CCC has provided Imap with detailed and reliable reports bearing facts, events and evidence. This never resulted in any constructive dialogue. CCC and Filcams CGIL finally launched their public campaign to achieve positive change and to protect basic human rights for workers at the factory. Apart from the removal of a few discriminative and illegitimate clauses from official company policy documents, structural improvements at the factory are still lagging.

One of the emails send to supporters of the CCC campaign was sent by SPI, a union at PT SCE that claims to be independent. The email includes workers’ signatures and photographs of protests that accuse the CCC of spreading false information. According to interviews conducted by KASBI (The Confederation of the Congress of the Indonesian Trade Unions Alliance) on 8th January with a number of unionised workers still working in the SP SCE, the demonstrations took place under the following circumstances:

On 20th December at 7AM around two hundred workers were gathered in the factory before going to a demonstration in front of the Klaten Labour Department. The company informed them that the factory would close if they did not protest against SP SCE.

During interviews workers reported that the next day management executives circulated a letter to all departments requesting workers to sign a petition to reject the reinstatement of the 42 workers. Workers were asked to sign it under threat of dismissal.

One week later, on 28th December workers were gathered outside the factory, asked to bear the flags of the SPI. Their picture was taken by the management.

The SPI seems to be very closely affiliated with the factory and the factory management. The contact details of SPI are the same as the PT SCE factory and several union officials within SPI are working at management level in the factory. This is in contradiction with Art. 15 of the Trade Union Law n. 21/2000 which says that workers who hold positions in a company that can cause a conflict of interest should not be the union officials of that company.

Additionally, the e-mail letter sent by the SPI is anonymous and written in Italian, which is highly unusual given that all the workers speak Indonesian and only limited English.

In the communication from PT SCE management and the 'independent' union SPI many claims are made about the case and about CCC. Read the chronology and the compendium of evidence for further detailed for further detailed information and facts about this case that refute these claims.

The request to CCC to travel to Indonesia

PT SCE invited CCC to go to Indonesia to check working conditions at the factory. While this seems a positive gesture; it is not the action that is called for. The factory has already received recommendations for change from the responsible agency - Klaten Labour Department, which are yet to be adopted. To have ethical and responsible behaviour throughout the entire supply chain means ensuring compliance with local and international laws and the international ILO conventions. This responsibility rests primarily with the manufacturer PT SCE but also with the Italian buyer Imap. This company has the duty to ensure that its products are manufactured in compliance with international standards. Freedom of association and collective bargaining are two of the fundamental rights of all workers, in accordance with ILO Conventions. In order to reach an effective solution to the dispute, factory owner PT SCE must accept an invitation to dialogue with free independent unions such as SP SCE. SP SCE union leaders have repeatedly stated that they want to develop positive and productive relationships with factory management.

How to resolve the ongoing dispute

PT SCE must commit to encouraging Freedom of Association (FoA) without any conditions, as a precondition for any genuine and reliable negotiating process. As long as PT SCE refuses any genuine dialogue process with unions, the company remains in violation with fundamental labour rights and it will be impossible to resolve the issues on the table. To ensure the start of such a meaningful process, the union, CCC and Oxfam demand PT SCE to sign the FoA protocol which has already been signed by major international sportswear brands, suppliers, and Indonesian unions (including KASBI) in 2011. The protocol has been acknowledged by the ILO Better Work program as an exemplary MSI model and is being supported by the Indonesian labor ministry.

The role of Imap

It is Imap's responsibility to ensure that their products are manufactured in compliance with international conventions. The responsibility of internationally operating garment companies is pointed out in the UN Guiding Principles on Bussiness & Human Rights, which gives companies the duty to respect human rights.

We do not ask IMAP to stop ordering from PT SCE. Instead we ask IMAP to continue sourcing and to work together with PT SCE on necessary improvements.

We call on Imap and PT SCE to: