Deadly denim under your Christmas tree?

by geertjan — last modified 2013-04-24 09:50
Did you get some nice new jeans for Christmas? Unfortunately, they may have been produced with sandblasting, a deadly manufacturing method which has caused thousands of cases of silicosis among the workers. A new report from Sweden shows a ban is not enforced. 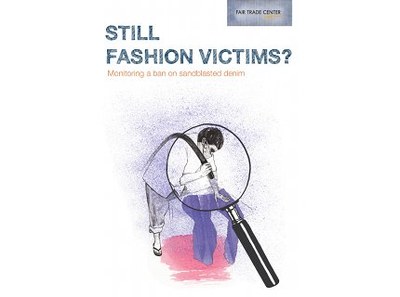 The Swedish Fair Trade Center's new study shows that a majority of investigated clothing companies in Sweden have banned sandblasting, but that they continue to face serious challenges enforcing the ban.

Only few of the clothing companies in Sweden can ensure that the jeans they sell are completely free of sandblasting, a manufacturing practice which often destroys the workers' lungs as they inhale particles of the sand which is used to produce the worn-out look.The new study shows that Acne, Tiger of Sweden, Varner-gruppen, MQ, RNB Retail and Brands still have suppliers with sandblasting capacities. The problem is further aggravated by the fact that clothing companies cannot constantly control their suppliers and subcontractors, especially further down in their supply chains.

Furthermore, few clothing companies test whether their jeans have been sandblasted or not. Fair Trade Center believes that companies should work closely with their suppliers to develop new more accurate methods and consistently use them as standard in their audits. By doing so, the consumer will take comfort in knowing that the denim under the Christmas tree has not been produced at the expense of workers’ lives.

The report is available at http://www.fairtradecenter.se/

Fair Trade Center is a non-governmental organisation (NGO) that promotes ethical trade by monitoring Swedish companies that trade with low-income countries. They are part of the network of the international Clean Clothes Campaign. For more information on Fair Trade Center, visit www.fairtradecenter.se/english