Demand justice for the victims of the Tazreen fire

by geertjan — last modified 2013-04-25 13:55
On the 24th November 2012, at least 112 workers died in the fire at Tazreen Fashions, a garment factory near Dhaka, Bangladesh. Many of the workers jumped to their deaths trying to escape from the nine story building. Others, unable to escape the blaze, were burned alive. Tazreen produced for a host of well known brand names, including C&A, KIK, Walmart, Li & Fung, Edinburgh Woollen Mill, Disney, Dickies, Sean Comb (ENYCE) and Kmart/Sears. 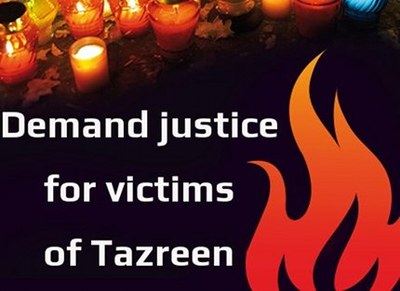 First reports suggest the fire was started by an electrical short circuit. The cause of over 80% of all factory fires in Bangladesh are due to faulty wiring. The fire in Tazreen Fashions brings the total of workers that have died in unsafe factories in Bangladesh since 2005 to around 700.

Accounts of the different fires clearly show that many of these tragic deaths could have been prevented  had the  factories met basic safety standards. The windows of the Tazreen factory were barred to prevent theft, and safe fire exits were mostly absent, making it impossible for the workers to escape the flames and smoke. At the time of the fires the managers initially stopped workers from leaving by dismissing a fire warning as a false alarm.

The Clean Clothes Campaign along with trade unions and labour rights organisations in Bangladesh and around the world call upon the buyer companies to:

CCC is calling upon your support to ask justice for the Tazreen victims and to avoid another Tazreen to happen.

I have been informed by the Clean Clothes Campaign about the actions your company announced in order to support the victims of the Tazreen fire. These actions fail on fundamental points to ensure fair compensations to the victims as well as to prevent such incidents from happening again.

-    Ensure full compensation for the victims covering loss of future earnings as well as damages, medical care, and educational fees for children of the deceased workers. All injured workers in need of medical treatment should receive so immediately,

-    Support a full and transparent investigation and to publish the audit reports of Tazreen factory,

-    Sign the Bangladesh Fire and Building Safety Agreement developed by local and international unions and labour groups to prevent  future incidents, disclose your supplier lists and promote freedom of association.