by geertjan — last modified 2013-04-24 09:50
More than one year of workers' struggle has not moved the company Mölnlycke Health Care (Thailand) Ltd., the Thai subsidiary of a Swedish multinational, to reinstate 22 union members that were unfairly dismissed in September 2011. The company produces hospital gowns for among others public health institutions in Sweden and Norway. Norwegian health institutions recently announced it would be particularly hard to sign a new contract with Mölnlycke given the company's continued refusal to reinstate the workers even after a national tripartite body ordered them to do so. Mölnlycke produces a wide range of other medical devices in several countries, including Indonesia, Belgium, Thailand, Malaysia, France, Poland and the Czech Republic. 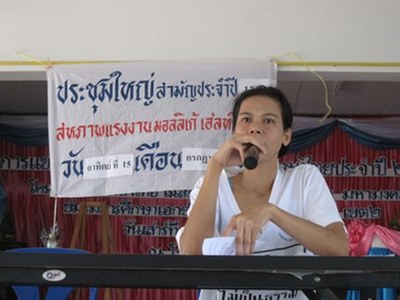 Mölnlycke Health Care (Thailand) Ltd. sacked the unionized workers following their participation in what the gown manufacturer describes as an 'illegal strike' in August 2011. According to the union and their federation it was not a strike. Instead, when the workers heard that their union representatives, who had negotiated a new collective agreement, had been victimized by way of “suspension order” they went to the supervisors and management in large numbers to ask for an explanation.

The Industrial Relations Committee (IRC),  a national tripartite institution comprised of employers, workers and government representatives that has been set up specifically to resolve industrial relations conflicts in Thailand, investigated the incident and confirms no strike had taken place. The IRC imposed on the company to reinstate the dismissed workers, but the company never implemented the order.

Instead,  the local management Mölnlycke Health Care (Thailand) Ltd. is said to have  intimidated workers into signing individual contracts on new reduced salaries and conditions.  Workers report that those who refused to sign have been punished by management through work suspension orders and forced transfers to jobs they are not properly trained for. Subsequently, a new payment system was presented to the workers with a request to accept the changes. However, hundreds of workers have signed a protest against the new pay scheme.

In a so-called mediation process 17 of the 22 dismissed accepted economic compensation as they were losing their homes and had difficulty maintaining the livelihood of their family. However, 5 workers still struggle to get their jobs back.

Clean Clothes Campaign has been informed that there are now several court cases involving Mölnlycke in Thailand: Apart from the unfair dismissal of union activists, the union has filed a court case against Mölnlycke for the breach of collective agreements and arbitrary cuts of workers' wages and welfare benefit. Late October the remaining 5 dismissed union members filed a court case against Mölnlycke Health Care (Thailand) Ltd. for non compliance with the IRC Order. Workers also have petitioned  the police and the court against the management's coercive behaviour against the  workers.

Despite increasing pressure, from Clean Clothes Campaign, Textile, Garment and Leather Workers Federation of Thailand (TWFT) and the Chemical Workers Union Alliance (CWUA) (to which the local union is affiliated) and the global federation IndustriALL, Mölnlycke continues to challenge the IRC’s decision in court.

The Clean Clothes Campaign Network and partners have contacted public procurers in Sweden and Norway and will continue to do so in more countries with the aim to inform about the case and to seek that the workers of Mölnlycke Health Care (Thailand) Ltd. are treated in respect of ILO core conventions and international human rights.

Support the dismissed workers – sign the petition to the Mölnlycke Headquarter in Sweden:

I have been informed by Clean Clothes Campaign about the dismissals of 22 unionized workers at your Thai subsidiary in September last year. The workers were sacked following their participation in what Mölnlycke representatives describe as an “illegal strike” one month earlier. According to the union and their federation it was not a strike but a gathering to seek an explanation on why trade union representatives, who had negotiated a new collective agreement, had been victimized by way of “suspension order”.

I am aware of the position of the Industrial Relations Committee (IRC) which investigated the incidents and confirmed that no strike had taken place. IRC imposed on the company to reinstate the dismissed workers, but as you know, your company never implemented the order but instead choose to challenge the IRC’s decision in court.

In a so-called mediation process on two occasions 17 of the 22 dismissed saw themselves forced to accept economic compensation due to the hardships the experience being left with no proper income for more than a year. However, 5 workers still struggle to get their jobs back.

I request that you refrain from prolonging the case further through the court. Please make sure that the dismissed workers of Mölnlycke Health Care (Thailand) Ltd. will be reinstated and that all employees at your two plants in Thailand are treated in respect of ILO Core Conventions and international human rights.