by geertjan — last modified 2014-06-18 11:48
The National Peoples’ Tribunal for living wages and decent working conditions of garment workers continued today at Kannada Sahitya Parishad, with much rigour and conviction with the participation of experts, union leaders, brand representatives and workers. 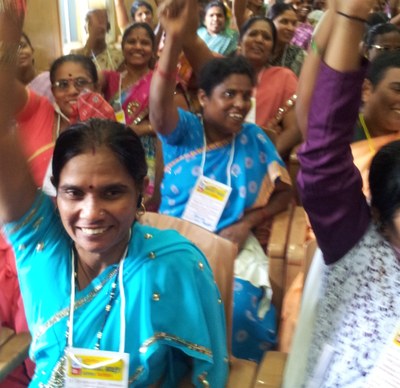 In a short film on the lives of garment workers’ experiences, one of the issues highlighted was that unfortunately workers still consider sexual harassment as a norm, as it is tacitly condoned by those who are responsible to monitor and prevent it. The harsh environment of the factory does not enable workers to share or communicate these issues with each other. If it is considered a norm, there is no opposition to sexual harassement.

Meenakshi Sundaram from (CITU) highlighted that the calculation of minimum wages took into account only food, clothing, shelter and a partial consideration for health and education. But in the current climate of privatization of these services, the minimum wage does not compensate adequately.  This has resulted in standardizing an inadequate wage for living. Without a strong process of unionization of workers, workers cannot achieve a decent wage.

Jeroen Merk, Senior Researcher, Clean Clothes Campaign, Netherlands stated that brands started social audits and adopted codes of conduct in the 90s, but since then, the picture continues to look grim, which reveals how brands made little efforts to address issues and concerns of workers.

Vijay Bhaskar, Asst. Professor from Madras Institute of Development Studies (MIDS) suggested that the Government has not done enough to assist the garment industry to become more competitive internationally. Utsa Patnaik, member of the Jury responded by saying that the Government is in fact attacking the industry by destructive policies such as making export of cotton easy, which led to the suicides by handloom weavers much before farmers’ suicides in India.

V Prakash, Supreme Court Advocate, Chennai shared how the labour department conspires with the employers to make it difficult for workers to form unions. He also informed the jury that the Supreme Court has challenged the practice of affixing CCTV cameras to monitor workers in factories which invades their right to privacy.

Ashim Roy, General Secretary of NTUI argued that there is a policy deficit from the Government to ensure living wage paid by industries. He said that the Government has left it to the market to fix wages but given the high unemployment and underemployment it is impossible for the labour market to provide for a decent living wage. The wages should be such that people can get out of poverty and not subsist within it.

The worker gets caught in a vicious cycle by working long hours and with such low wages. Getting out of it seems almost impossible without some changes in the current system. There is no scope for intellectual and/or physical development for the workers. Since they are unable to send their children to schools or give them nutritious food, their children are susceptible to get caught in the same loop.

Arvind Narrain from Alternative Law Forum and Vikas Barnwal, from Society for Labour and Development made a submission from the people’s advocacy group. They summarized and highlighted that living wage is insufficient for workers to support their families. No bonus, forced overtime, lack of PF, no medical expenses covered – makes the situation worse.

Secondly, wage theft through underpayment, non-payment, late payment and illegal deduction was also discussed. They pointed to the poor working conditions in factories  – where they have to forgo breakfast, suffer during menstruation, child care and they also suffer subsequent health problems like TB, asthma etc. Further, they reiterated that workers are not being treated with dignity – they are verbally abused and insulted. Human dignity is at stake. There are also high levels of gender discrimination in factories. If a worker dresses up well, lewd comments are passed on her. One of the workers’managlsutra was cut off, and many of the workers’ have been physically abused. In addition to this, the impossibility of forming unions makes the situation worse. They are unable to collectively withstand these attacks. Article 21 and 43 of the Indian Constitution were used as reference points to highlight these issues.

Following the two day national tribunal, the jury will deliver a verdict on the 25th of November at Unnati Auditorium. The verdict will encapsulate the concerns emerging from both days on issues of wage theft, low wages, sexual harassment and working conditions of garment workers. The jury will present recommendations to brands, unions and government officials in order to address issues raised at the tribunal.

The jury will deliver the verdict on 25th November on Unnati Auditorium, Pampa Mahakavi Raste, Shankar Puram, Next to National College Swimming Pool followed by a question and answer session with the gathering and the media. The verdict will present recommendations to brands, unions and government officials in order to address issues raised at the tribunal.