by geertjan — last modified 2013-04-29 15:37
Garment workers alongside international brands and government representatives gave evidence at a tribunal which started in Bangalore this week to assess claims of systematic human rights abuses in the Indian garment industry. 250 garment workers from Bangalore, Gurgaon and Tirupur attended the tribunal, foregoing their daily wage and attendance bonus, to share testimonies of rights abuses and exploitation at the hands of western brands, surveyed by a panel of international judges. 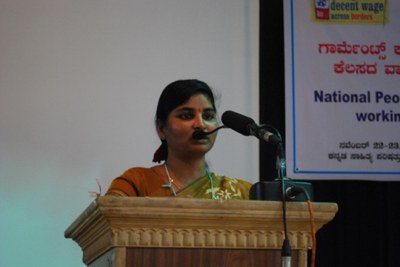 “The wage was very low. I could not even feed my 3 children with at least bread and milk. My daughter asked me one day, 'Why you gave birth to me if you are not able to feed me properly?' I pledged my mangalasutra [necklace equivalent to a western wedding ring] to pay my children's school examination fees.”

Another worker producing for Gap said “We are not allowed ever to take leave. If we do, the day we return to the factory we are made to stand outside, and they abuse us by calling us bitches, donkeys and even tell us to go die.. We have to make up the time lost in our breaks. Supervisors constantly harass us by calling us names and throwing pieces of fabric at our faces.”

Many spoke about sexual harassment, verbal abuse, as well as poverty wages and the endemic problems around overtime and the right to join a union.

Multinational fashion retailer H&M, was also present and a representative spoke about their role in the supply chain. “We agree that wages should be enough to live on. We are working with our suppliers to ensure compliance on this.” said Tobias Fischer, Relations Sustainability manager for H&M. The brand acknowledged that overtime was also a problem in its supply chain with a significant proportion of suppliers involved in non-payment of overtime wages.

A statement from the sportswear brand adidas was also presented. GAP, despite being invited on a number of occassions, were conspicuously absent for the Tribunal.

Wages below poverty levels are a ongoing problem in the Indian garment industry, which exports €7284 million of clothing for European consumers each year. The monthly minimum wage for garment workers in Bangalore is Rs 4472, (around €64). This is said to be only 43% of a living wage enough to support a family.

The tribunal continues tomorrow, where experts from law and academic backgrounds will give evidence about economic and industry barriers to change. The judges will present a verdict on Sunday with recommendations for industry stakeholders to address the issues raised.

2.The 'National People's Tribunal on the Right to a Living Wage', is taking place from 22-25th November in Bangalore – one of India's garment production centres. It has been organised by the International Asia Floor Wage Alliance in collaboration with Indian garment workers' trade unions and workers' rights groups, and seeks to make public the relevant concerns of those employed in the Indian garment sector.

3.The Permanent People's Tribunal movement was set up to highlight systematic human rights abuses, and present recommendations for remediation in a global context. Sessions of the tribunal have focused on issues such the Bhopal disaster, and American intervention in the Brazilian Amazon.

4.The People’s Tribunal in India is the third of its kind to be held on issues in the garment industry, the first being held in Sri Lanka in 2011 and the second in Cambodia earlier in 2012.