Books and plastic replicas of prison food: a visit to Somyot

by geertjan — last modified 2013-04-24 09:51
In November, our colleague Marcella Kraay visited Somyot in prison in Thailand. 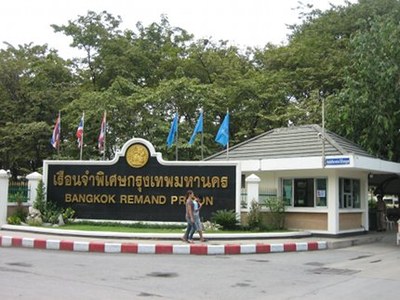 'A few details give away the true nature of where I am. A mailbox where letters to prisoners can be dropped, a shop selling pre-sealed dried foods for visitors , a display case with (I kid you not!) plastic replicas of the food prisoners receive as their daily fare, and, most telling of all, a guarded door behind which I can see the visiting rooms, in which the prisoners are separated from those visiting them by barred, perspex windows.

I am here to visit Somyot, a Thai labor rights activist and CCC partner, who has been in detention since April 2011, charged with lese majeste, article 112 of the Thai penal code. Somyot has been held without bail, because, as the authorities claim, he presents a threat to national security and they fear he will escape if released. Somyot's local supporters suspect it is a ploy to shut down a critical voice, a tactic they are all too familiar with.

When it is my turn to go inside the visiting room together with four Thai who regularly visit him, Somyot is sitting in the middle, with a webmaster on his right and a writer on his left. It is “112 prisoners” visiting hours. Somyot is one of seven prisoners charged with lese majeste held in this prison at the moment. I have a seat in the barren, stuffy room and pick up the blue phone. On the other side of the window which separates us Somyot does the same. He looks healthy and is keen to hear news from the outside world. When I convey greetings from my CCC colleagues, he immediately inquires about current CCC activities. He asks me to send some materials for him to translate, so he can promote our work in Thailand.

Somyot's typical day starts at 5.00am. Since he is not allowed to leave his cell until 6.00, he exercises for an hour before having breakfast and going to the library room to work. He translates articles and catalogues newspaper clippings of labor and human rights issues. Somyot also studies Khmer and manages the prison's book collection - he is known as “the librarian” by everyone on the inside. His quest now is to expand the collection of books in Khmer and Burmese languages. Somyot explains there is a growing number of prisoners of those neighboring countries. They are migrant workers who come to work in construction. At the end of three months, instead of being paid, they get reported by their employers to the police for having worked without a work permit. Without any money to pay for fines or bail, they end up in prison.

In the afternoon Somyot usually receives other prisoners to deal with what he calls 'cases'. Others, including the aforementioned migrant workers, come to him for advice and help. I jokingly say to him he is the prison's social worker, and Somyot laughs. Then, more seriously he says “after some time here, people lose hope, they get depressed. We try to help them out.” Playgrounds and ice cream cones aside, the harsh reality is that most of the prison's inhabitants are poor and many of them can not make bail. “You know,” Somyot continues, “here they know I get a lot of international support. Without that support I would maybe already be dead.”