Join our global Week of Action against adidas!

by geertjan — last modified 2013-04-25 13:50
This week, we join hands with our friends from Labour Behind The Label, SumOfUs, USAS, People and Planet, Ms Wanda, ILRF and many more to tell adidas to stop throwing around excuses. We want them to finally pay up the US$1.8 million of severance payments they owe the Kizone workers in Indonesia. The Kizone factory closed in April 2011, leaving 2,800 people out of work and without pay. It's time for a global Week of Action! 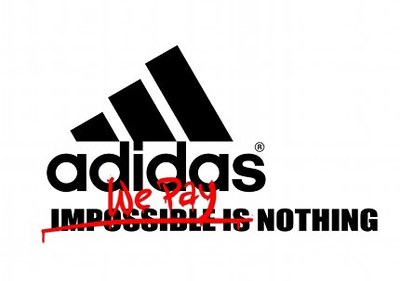 You can be involved!

Check out our daily actions on Facebook and show adidas we are closing in on them!

Today, we ask you to go to http://www.facebook.com/adidasoriginals, leave your own comments on any of their posts or copy-paste our message:

“Nothing is Impossible. Pay the Kizone workers the US$1.8 million severance they are owed. If you can talk the talk, you gotta walk the walk adidas!”

It's all about numbers, so leave your comments, share with your friends and let the global action begin!

The campaign pressure is working: although adidas continue to deny responsibility they have tried to deflect criticism by coming up with various schemes to get themselves off the hook, including handing out food vouchers and organising a summit last month to agree what can be done in future factory closures. This is not enough – PT Kizone workers simply want what they are owed and we won't stop until they get it.

adidas is feeling the heat, but we need more. We want to show adidas they can't ignore us. Together we will continue breathing down adidas' neck until the garment workers at the PT Kizone factory are paid the US$1.8 million in legally-mandated severance they are owed.

This might be the final push the workers need to win what adidas owes them.

Join us and keep checking us on facebook for daily actions!

Thank you for your support,