by geertjan — last modified 2013-04-24 09:50
A documentary revealing the miserable conditions faced by Cambodian factory workers producing goods for the fashion retailer H&M was aired on Swedish national television last night. Campaigners and the media are calling on H&M to respond to allegations of poverty pay in the industry. 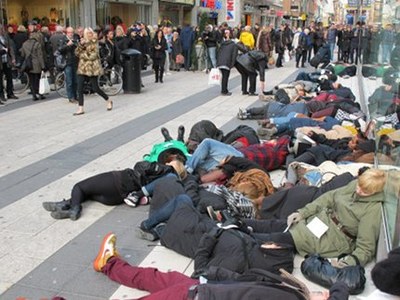 “The documentary revealed the reality behind the glamorous veneer of fast, cheap fashion sold in H&M stores,” said Klaus Melvin Jensen, Coordinator for Clean Clothes Campaign Denmark. “I fear many of H&M’s customers will lose their appetite for cheap clothing after seeing this film.”

In recent months H&M have held a number of high profile meetings with dignitaries such as the Vice Prime-Minister of Cambodia, and officials from the wage board of Cambodia to call for a higher minimum wage to be implemented for workers. Yet campaigners say that meetings and good intentions are not a sufficient response to the pressing health risks and poverty conditions faced by factory workers.

“Low wages come at a high cost. Last year, over 2400 workers passed out in Cambodian factories due to malnutrition as a direct consequence of low salaries. But H&M, one of Cambodia's main buyers, continues to refuse to pay a living wage to its workers,” says Jeroen Merk of the International Clean Clothes Campaign. “This is unacceptable.”

The Clean Clothes Campaign Network in collaboration with the Cambodian trade union C.CAWDU launched in September a European-wide campaign called 'No more Excuses', demanding that the company take a proactive role in paying a wage that allows its workers to live with dignity. The campaign aims to draw attention to the fact that whereas the minimum wage for garment workers is USD 61 a month this amounts to less than 25% of a living wage in Cambodia.

In an attempt to respond to the documentary's findings, H&M announced plans on Tuesday for a project to strengthen union – management dialogue at some production units in Cambodia. Campaigners and unionists have welcomed this step, but have expressed concern that it offers no guarantee of living wages for workers who need them most.

“We support the idea of building a respectful dialogue between the trade unions and the employers in Cambodia,” says Athit Kong, Vice President of the Coalition of Cambodian Apparel Workers' Democratic Union (C.CAWDU), “but H&M must also play its part. It is absolutely necessary that any project includes trade unions at the local and the nation level and really reflects the worker’s voices. This is the only way to achieve visible changes on a grassroots level. We call upon our Swedish union friends to make sure H&M is brought to the table to negotiate a real agreement with Cambodian and international unions that will improve the conditions for the Cambodian workers”

Clean Clothes Campaign activists are calling on H&M and other garment buyers from Cambodia to take immediate action to address the poverty caused by the low wages in Cambodia.  They are asking H&M to support the Cambodian trade union's 131 USD minimum wage goal by issuing a public statement of support and engaging in building an action plan for paying this figure with suppliers. To ensure long term results on the ground and guarantee considerably higher wages for the garment workers, H&M needs to adopt an action plan for its whole supplier base with a clear benchmark for a living wage, a timeline, and a follow up procedure for delivering  this at a factory level.

You can see the documentary (with English subtitles) here: http://www.tv4play.se/program/kalla-fakta?video_id=2232717