by geertjan — last modified 2013-04-24 09:51
CCC calls on Bratex management and buyers Fruit of the Loom and Viania to resolve a dispute in the factory, which has been ongoing for more than two years. Sri Lankan supplier Bratex has yet to come to an agreement with workers, meaning 31 workers remain without jobs, and workers' demands in relation to wages, bonuses and freedom of association have still not been met. The year long investigation of the Fair Labor Association FLA has failed to produce any results. 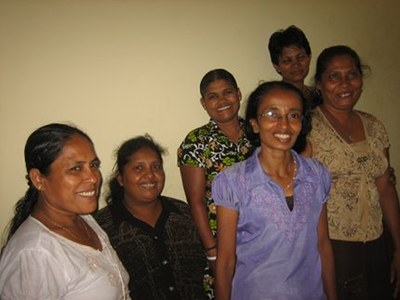 The factory, based in the Katunayake Free Trade Zone, supplies underwear to Fruit of the Loom brands and Viania. The CCC, ILRF and Bratex union FTZ&GSEU started informing brands over 18 months ago after workers who had participated in a legal strike were arrested and dismissed. The  FTZ&GSEU in February 2011 asked the FLA to investigate the case as key buyer Fruit of the Loom was in the process of becoming  a member.  The interventions by FLA and brands have still not led to a resolution of the case.

The dispute has its origins in 2009, when workers at the factory raised concerns about wages, bonus payments and freedom of association. As the workers' concerns were not addressed and new management unilaterally imposed changes to long-standing practices a strike took place in February 2011. Management allege a clash broke out during the strike in the management office and police were called. Union activists and office bearers were accused of attacking management, but there is no evidence to link the particular workers that were accused to the attack.  Cases in the magistrates and labour course are still pending in relation to these allegations, which could take as long as two to three year s to be heard. Nevertheless, 31 out of 32 workers were dismissed following investigations through an internal, company controlled, disciplinary procedure known as Domestic Inquiry.

The Clean Clothes Campaign had not drawn the public's attention to this case because we hoped the FLA process and brand interventions would lead to a fair and just resolution. As there still has been no progress whatsoever, we now publicly call on all brands buying from the factory to take steps to ensure Bratex management:

The FLA are also under fire from Maquila Solidarity Network for failing to resolve a case in Honduras and have been slammed for their handling of the investigations into  Apple supplier Foxconn in China.