by geertjan — last modified 2013-04-24 09:50
The South-Eastern Norway Regional Health Authority, the largest public procurer in the health sector in Norway, publicly supports a number of dismissed Thai workers at Mölnlycke Health Care (Thailand) Ltd. The company which produces hospital gowns sacked 22 unionized workers in September 2011 following their participation in what the gown manufacturer describes as an 'illegal strike'. 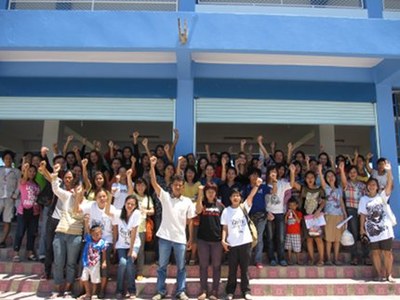 According to the union and their federation it was not a strike. What really happened is that when the workers heard that their union representatives, who had negotiated a new collective agreement, had been victimised by way of “suspension order” they went to the supervisors and management in large numbers to ask for an explanation.

The Industrial Relations Committee (IRC) investigated the incident and confirms no strike had taken place. IRC imposed on the company to reinstall the dismissed workers, but the company never implemented the order. IRC, a national tripartite institution comprising employers, workers and government representatives, has been set up as a legitimate body to resolve industrial relations conflicts in Thailand.

Later the local management Mölnlycke Health Care (Thailand) Ltd. is said to have intimidated workers into signing individual contracts on new reduced salaries and conditions. Workers report that those who refused to sign have been punished by management through work suspension orders and forced transfers to jobs they are not properly trained for. Subsequently, a new payment system was presented to the workers with a request to accept the changes.

The South-Eastern Norway Regional Health Authority after having been contacted by CCC now speaks out against the dismissal of the workers. 'We have spoken to Mölnlycke and made clear that we want them to comply with the IRC's decision,' says Grete Solli, special advisor environmental and social responsibility to  Norwegian Media 'If this conflict is not resolved soon, it will be particularly difficult for us to sign potential new contracts, as doubt has been raised whether they meet our requirements for the ILO's core conventions.'

Last year the South-Eastern Norway Regional Health Authority purchased products from Mölnlycke worth €5 million euro. The Health Authority is just one of four institution of its kind in Norway.

Despite increasing pressure, from Clean Clothes Campaign, Textile, Garment and Leather Workers Federation of Thailand (TWFT) and the Chemical Workers Union Alliance (CWUA) (to which the local union is affiliated) and the global federation IndustriALL, Mölnlycke will challenge the IRC’s decision in court. The court hearing is scheduled to take place on the 14th of November.

The Clean Clothes Campaign Network and partners will continue to contact public procurers in more countries to inform about the case and to seek that the workers of Mölnlycke Health Care (Thailand) Ltd. are treated in respect of ILO core conventions and international human rights.