by geertjan — last modified 2013-04-25 13:45
One month after our petition with nearly 50,000 signatures was handed over to adidas by US and European activists, the sports brand issued a statement saying how they intend to respond to the outstanding US$1.8million in severance payments owed to former Kizone workers in Indonesia. 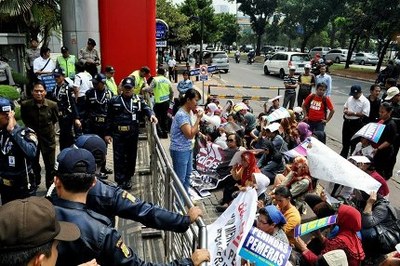 The statement contains a proposal for a global summit in late October in Geneva to discuss proposals for a general private insurance fund for all workers affected by factory closures and non-payment of wages and benefits. A second proposal is to commit another US$275,000 in humanitarian aid to the Kizone workers. The first batch of humanitarian aid worth US$250,000 was provided to workers in supermarket vouchers worth just 43 euros, which the workers explicitly rejected as a method of payment. adidas argue they should not have to pay the full amount because they had left the factory by the time the factory closed down, but as we have made clear in previous updates the violations began whilst adidas were still sourcing at the factory.

Whilst a long-term solution to the issue of severance pay is welcome, particularly as adidas is notorious for failing to pay worker severance, this needs to involve worker representatives to make it a meaningful initiative. The provident fund that adidas' propose cannot replace the severance payment to the Kizone workers, as it remains adidas' responsibility to provide redress for rights violations that have already taken part in relation to their business. More importantly, this long-term proposal does not address the immediate financial difficulties Kizone workers face. It's US$1,8 million they need, not US$275,000.

Crumbs to the birds

Former PT Kizone workers and supporters have repeatedly asked adidas to negotiate directly with representatives of the 2800 workers and ensure they receive the US1.8million they are owed. So far they have failed to do so.  That is why we see the statement rather as a clever PR stunt by adidas than as a genuine effort for a real solution with workers. While adidas is trying to twist its way out of a short term, viable solution, other buyers from the factory have already paid nearly half the US$3.3 million owed, making adidas' efforts look like throwing crumbs to the birds.

Just after adidas issued the statement, workers in Indonesia were again fighting for their rights. On October 1st, the former Kizone workers and allies staged a colourful protest at the Supreme Court, which was followed by a demo at adidas’s Jakarta office. adidas refused to meet the whole group of workers. At the Supreme Court, they called for a quick resolution to the Kizone bankruptcy, and for workers to receive the full amount of money. Workers from other factories spoke about their experience in similar struggles, and the need for solidarity. adidas refused to meet the whole group.

adidas clearly shows it has no intentions to speak to the Kizone workers. The company continues to fail to consult or even inform the workers. The legitimate union representative of the workers has not yet been notified of these plans to provide humanitarian aid and hold a summit. adidas' claims to '[p]rotect[] the interests of global workers involved in producing our footwear and apparel', seem hardly credible in the light of its actions.