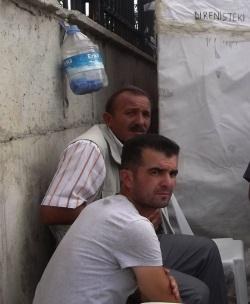 I worked at Hey Tekstil for eleven years before I was fired from my job in February. Until the day when we were fired, salaries were often paid late and bonuses were often not provided. Hey Tekstil still owes me three months of wages. We have waited until our problem would, but nothing happened.

I have been here [in the picketline] ever since I got fired. My brothers help me out by lending me some money while I take part in all the actions. So far, I have taken part in more than hundred actions targeting everyone from the AKP to Li&Fung. We went to the governor’s office and we also protested in Taksim Square. I'm just asking the wages for the three months I was not paid and legal severance pay. After all, it is rightfully due to me.

I worked at Hey Tekstil since it opened and there were six machines operating. At first, working conditions were very bad and we did not have a union. And there is no denying our employers are legally responsible for what we are due. Legally, our employer can call us back to work but this never happens because they can pay a fine instead. And even though we will win our cases it is really difficult to collect the money. For almost eight months I have been here, and during this time I have experienced extraordinary economic hardship.

I am here in the place of my wife who worked at Hey Tekstil for ten years, since 2002. For the first three and a half months of the resistance my wife was here. But she has been seriously ill with cirrhosis and since she was fired has had high blood pressure, so she could faint at the picket line. Doctors have told us she should not participate because of the stress, and I don't see a bright future for her.

I am retired and I receive a pension of about 930TL [402 euro] per month. We have two children, my son is 28 and my daughter is 25 and she lives with us. We need my wife's unpaid wages and severance for everything including our medical expenses.