by geertjan — last modified 2013-04-24 09:50
On Monday campaigners in Germany, the UK and the US handed over a petition to adidas demanding overdue severance pay for 2,800 Indonesian garment workers. In total 1.5 million is illegally withheld from the workers, which is less than two per cent of the cost of adidas Olympic sponsorship. 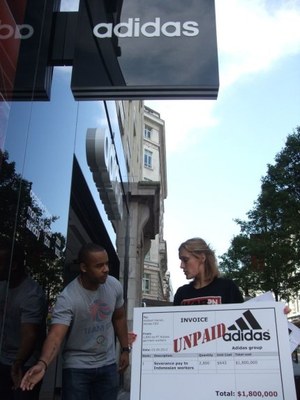 Almost 50,000 people signed our 600-page petition to demand adidas to pay, which got emailed to adidas. Activists personally delivered it to the adidas headquarters in Germany and to its flagship retail stores in the UK and the US.

At adidas' headquarters in Germany, our petition is now finding its way to the top. In London, at the peak of the Paralympics, War on Want activists handed in the petition and a giant invoice to the adidas flagship store in central London. But the shop manager denied the activists access to the store and refused to take neither the giant invoice nor the petition, so the War on Want activists left them on the store’s doorstep. In the US, the shop manager refused to accept the invoice that USAS students offered him and shut down the store for two hours!

While other buyers have paid a portion of the severance, adidas is the only major buyer that has refused to contribute a single penny. As a result former workers have had to withdraw their children from school and are barely able to afford two meals a day for their families.

adidas are still refusing to pay the compensation that these workers are owed, so we will continue our campaign to demand adidas takes responsibility for the people who make their clothes. Join us on Facebook and Twitter to find out the latest about our actions.