by geertjan — last modified 2013-04-24 09:50
An offer by adidas to donate food vouchers to Indonesian workers owed millions of euros has been described as downright insulting by union representatives and labour right campaigners. The workers, previously employed at ex-addidas supplier PT Kizone, have been fighting for over a year to get adidas to pay the 1.5 million euros still owed to them in unpaid severance. Adidas' offer: a food voucher worth just 43 euros. 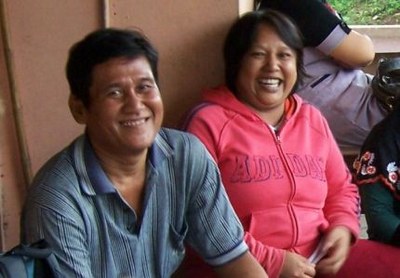 Over the next two months adidas' name will be beamed to every corner of the world. It has paid an estimated 127million euros to be the main sponsor of the London 2012 Olympic and Paralympic Games and for many of the competing athletes to wear its brand. It expects this exposure to yield billions of euros in extra sales. Yet adidas claims it can't pay a mere 1.5 million euros that are legally owed to workers who earned just 50 cents an hour making its clothes.

The amount it has offered to Kizone workers is a pittance: equal to the cost of just one London 2012 t-shirt. This strikingly low figure is not even given in cash but in the form of a voucher. And here's the punchline: it can only be spent in one supermarket.

Entis, who worked at PT Kizone for 11 years before the owner fled the country, describes the food vouchers as 'abuse': “I reject the offer of a voucher for Rp 300,000 (later upgraded to 500,000, about € 43) from adidas. These vouchers will not cover our debts, because since PT Kizone closed we have had no income and no work. I, as a former Kizone worker and as a representative of my fellow workers, state that we demand US$1.8 million as our severance. Food vouchers is not what we want”.

Workers have made it clear that a single food voucher will do nothing to help them pay school fees for their children or keep the landlord from throwing them out of their homes. They are asking for your help to get the money they are owed.

Liz Parker, Urgent Appeal Coordinator at Clean Clothes Campaign says: "It is not only extremely disappointing that adidas refuses to pay up, but also a downright insult for the workers, who have been working for years to hike adidas' profits".

adidas are starting to feel the pressure. After our last week of action they finally agreed to meet with the union representing Kizone workers. But we need more. Our friends over at SumOfUs.org have offered to help and have launched a petition calling on adidas to pay up.