by geertjan — last modified 2013-04-24 09:51
CCC is gravely worried about the violent repression of garment workers and their labour leaders in Ashulia in Bangladesh. 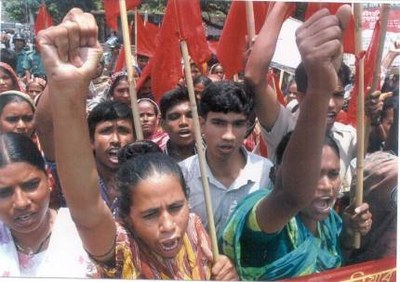 On June 11th, thousands of garment workers took to the streets demanding a pay hike. Instead of increasing the wages, the factory owners closed down over 300 units, leaving the workers with no prospect to an income. Since then, 25 people have been arrested and many have been wounded during severe clashes with the police and union leaders are fearing brutal treatment by the intelligence agencies in Bangladesh. Although the factories have reopened again, the demand for higher wages remains a pressing issue and the level of repression unacceptable.

International companies should understand after years of wage-related protest that low wages are the root cause for the ongoing unrests. The legal minimum wage rate remained on the same level since the raise in 2010, while living costs have spiraled and workers have been demoted to lower positions to avoid a pay hike.

Once again, the Bangladesh government responds by increasing the level of repression and has instigated investigations into union and labour right organisations instead of engaging into negotiations to ensure wages meet the cost of living. And while all factories have been reopened, factory owners still refuse to reopen negotiations on minimum wages.

During the major wage protests of 2006, 2008 and 2010, hundreds of workers and trade unionists were arrested, including Aminul Islam, a Bangladeshi labor rights activist and former apparel worker who was tortured and murdered in April of this year. Dozens of labour leaders are still facing charges of instigating riots and related activities; charges regarded as baseless by international labour and human rights organisations. Labour right organisations fear that unless swift action is taken repression against workers will rise to similar levels as in 2010.

CCC calls upon all companies buying in Bangladesh to: