by geertjan — last modified 2013-04-29 15:52
2,800 workers formerly employed at the Indonesian sportswear manufacture, PT Kizone have now been fighting for over a year to get severance owed to them following the closure of the factory and the abscondment of its owner. 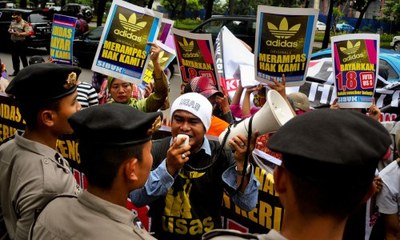 Green Textile, an agent that was the main buyer from the factory, assumed control of the factory throughout February and March and workers continued to produce at PT Kizone. Green Textile paid back pay and wages owed to the workers for the period December 2010 - March 2011. The factory was finally closed in April 2011, and PT Kizone was declared bankrupt.

Since then workers have been fighting to get the severance money they are owed, which totalled almost US$ 3.4 million. Other buyers at the factory have now contributed a total of US$ 1.6 million to a fund to provide severance pay. This is welcome, although largely insufficient to meet the needs of the workers. Adidas have so far refused to contribute a single cent to the fund.

In December 2011 the Playfair 2012 campaign, of which the Clean Clothes Campaign is a member, reported on the ongoing dispute at PT Kizone (http://www.playfair2012.org.uk/2011/12/1-8-million-owed-to-pt-kizone-workers/)

In December 2011 and again in January 2012, adidas issued statements in response to this article. In these statements, adidas restated the facts of the case (which are largely undisputed) and lays out their reasons for washing their hands of responsibility for these workers, who had been producing for adidas for several years prior to the closure.

1. Adidas were not producing at the factory at the time of closure:

Firstly, adidas claims they can assume no responsibility for the workers as they advised the factory in June 2010 that they were removing orders from the factory and therefore had no business relationship with PT Kizone at the time of the closure. In their statement to Playfair published on the 2nd February 2012 adidas state that “PT Kizone factory was illegally closed and abandoned by its owner, not by the adidas Group, and this occurred more than six months after we placed our last order with them”. However, in their earlier statement, made on December 13th 2011, adidas concede that PT Kizone workers were involved in adidas production until late November 2010. Furthermore, adidas included PT Kizone as a supplier in both their submission to the Worker Rights Consortium (WRC) database of production sites for US University branded apparel in January 2011 and on their own publicly available supplier list in the same month.

The violation of workers’ rights in regard to non-payment of wages started as far back as September 3, 2010, when PT Kizone stopped paying mandatory terminal compensation to workers separated from employment. Between September 3 and November 1 2010, 32 workers voluntarily left the factory’s employ, but were not paid the compensation required by law and agreed under the collective bargaining agreement in place at the factory. The factory also failed to pay death benefits to the families of several workers who died during this period.

Further, given that the right to severance pay is an accrued benefit over the whole period of employment, the workers are entitled to receive money earned over the several years of adidas’ production.

2. Adidas cannot assume responsibility for a breach of law committed by their supplier

Secondly, adidas state that they cannot assume nor accept liability for the impact of closures or lay-offs at factories which they do not own themselves. In their December response to Playfair they state that “Enforcing the rule of law is core to sustainable business and we cannot be held responsible for someone else breaking the law.”

However, under the principles of university codes, by which adidas are bound through contractual agreement with the US universities they produce under licence for, it is clear that licensees have the same level of responsibility for ensuring compliance at contracted factories as at directly owned facilities. adidas’ own Workplace Standards state that, “Wages must equal or exceed the minimum wage required by law or the prevailing industry wage, whichever is higher, and legally mandated benefits must be provided,” and that suppliers must comply with “all legal requirements.”

Furthermore, in line with UN Principles on Human Rights and Business corporate entities such as adidas are required to carry out proper due diligence to ensure the prevention of violations such as this. This means that adidas do have responsibility to ensure the rule of law is being followed by all of its suppliers in regard to workers’ rights. adidas itself appear willing to accept this responsibility for certain types of violations of law. Yet when it comes to cases involving cash payments to workers they continue to refuse it. It is inappropriate for a company to pick and choose those breaches of code standards and laws it is willing to enforce and those it wishes to wash its hands of.

When adidas decides to withdraw orders from a factory where it has a long term production relationship, they should carry out due diligence in regard to the impact this withdrawal may have on the factory and workers. If this had taken place adidas would have had early warning that the factory was in trouble and could have taken steps to prevent these violations from taking place. In a communication with the WRC in November 2011 adidas maintain that “While the commercial relationship was open, we monitored the PT Kizone workplace to ensure that it adhered to the standards and practices required….”

However, since adidas took no action to correct the violations committed in autumn 2010, while their goods were on PT Kizone’s production lines, and took no action at any time to address the factory’s increasingly evident financial crisis, we must conclude that adidas did not fulfil its obligation to monitor compliance and did not, as they claim, “oversee, on an on-going basis, that sufficient resources are available to meet all employee liabilities in the event of downsizing or closure.” The failure of adidas to pick up and address violations that were already occurring during production increases their responsibility to provide proper redress for the affected workers.

3.Adidas are taking other steps to support PT Kizone workers

In all its communications with campaigners in regard to the PT Kizone case adidas has been keen to emphasise that they are sympathetic to the plight of the workers involved. They have outlined a number of actions taken by the company to address this. Such actions include:

We of course welcome the fact that 950 workers have found more work, although this accounts for less than half of those employed at PT Kizone. It is also important to note that this figure has yet to be verified and there is no information available to suggest that workers have been re-employed as a direct result of adidas' efforts. Workers at PT Kizone state that adidas have in fact been operating a scheme that discriminates against those workers still fighting for severance. This belief is supported by the fact that adidas have refused to make contact with DPC SPSI TSK, the union representing ex-Kizone workers.

The union also points out a number of other issues in relation to adidas' offer. Many of the PT Kizone workers are older and it is mainly younger workers who are being offered employment., Many of the jobs being offered are located too far away from workers' homes for them to be able to take them up. In addition, PT Kizone workers were all employed on permanent contacts, yet the new work being offered is predominantly on a short term contract basis. This represents a real decrease in terms and conditions of employment.

Even if we give the benefit of the doubt and accept adidas' claim in this regard the employment of workers in new factories doesn't address the main concern: that each worker is owed a significant amount of severance pay that she has already worked hard for and will never receive.

The facts of this case are clear: 2,800 workers, many of whom were earning as little as US $ 0.60 per hour during their employment, have been deprived of thousands of dollars in severance payments. This is money they earned in part through the production of goods that has helped to contribute to adidas’ profits, which last year were up 18%. These workers should not be expected to bear the cost of the failure of adidas and other buyers, company owners or the Indonesian government to ensure their employer complied with the law. If adidas really care about the plight of these workers, they must ensure this money is provided.