by geertjan — last modified 2013-04-24 09:51
Many people can sympathize with the Robin Hood ‘stealing from the rich to give to the poor’ ideology, but in Haryana, India, the opposite is happening. Mazdoor Ekta Manch is seeking your support for their Stop Wage Theft campaign. Please sign their petition. 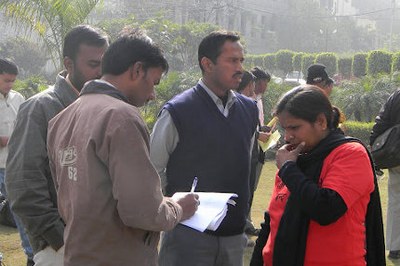 Profitable garment manufacturers are stealing from their workers’ already very low minimum wages, which are only 178.61 Rupees, or about €2.50 per day. All workers are confronted with these illegal deductions while women workers are paid less than men for the same work. In addition the money workers pay into social security funds also disappears, leaving them unable to benefit from it. Wage theft, on top of already low wages means that workers cannot survive on what they earn and can go into debt to deal with situations such as illness in their family or to provide education for their children. We need your help to put an end to these illegal practices.

Mazdoor Ekta Manch is a platform of workers in Gurgaon, just outside Delhi, India. Their mission is to build the power of workers and their families, and secure their dignity and rights where they work and live.

They have started a campaign targeting the government of Haryana to put an end to this disgraceful and illegal practice by enforcing the existing laws to protect workers from wage theft. They ask the government to ensure :

1. Workers should be paid according to the grade at which they work

2. Wages should be paid in time and receive a payslip

3. Illegal deductions should not be taken from workers’ wages

4. Workers should be paid the annual increment on time

5. Overtime should be paid at the double rate

6. Equal pay for equal work between men and women

Mazdoor Ekta Manch is seeking your support for their Stop Wage Theft campaign in support of garment workers' struggles in Gurgaon. Please sign the petition.
http://www.change.org/petitions/tell-the-indian-government-to-stop-companies-stealing-from-workers-wages

A blog with more information and stories can be found here: http://vetanchoribandkaro.wordpress.com/about-2/