Updates from the Somyot trial in Thailand

by geertjan — last modified 2013-04-25 13:39
On January 16th, Somyot Prueksakasemsuk, editor of “Voice of Taksin” magazine, was brought to Nakornsawan Provincial Court for the third hearing of the prosecution witnesses. More than 40 supporters and family attended, including an international observer, John Maynard, the president of the Postal Workers Union of Australia, and long time friend of Somyot’s. 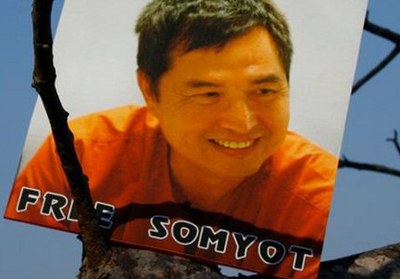 The only witness on Monday was the former secretary of Sunai's Law office, Miss Pranida Homhuan. The attorney asked Pranida Homhuan her view about the two articles written by Jit Pollachan, the basis of the case against Somyot. She confirmed that she had been asked to review the articles but that her opinion was that the content of the articles did not relate to the king. This statement was made under oath to defense lawyer, Mr. Suwit Thongnuan. Somyot arrived in court shackled and reported to observers that the regime of Nakhonsawan prison was more strict than Petchaboon prison and that he had been staying in the infirmary due to ill health. According to Somyot he has been unable to buy food suitable for his health problems for some time.  Somyot made the request for a transfer back to Bangkok prison rather than face the transfer to Songkhala prison for the next defense witness hearing, on the basis of his security and health. The judge claimed that he had no authority to grant this request.

After the hearing,  Somyot’s defence lawyer Mr. Suwit  Thongnuan said that he did not understand why Pranida Homhuan had been called as a witness as there was no relevant evidence presented at the under questioning. He argued that the movement across Thailand for this hearing was not warranted and put an unnecessary pressure on his client. He restated his concern about Somyot’s security at the next hearing as it will be held in Songkhla Province, a region dominated by the PAD (People's Alliance for Democracy ) which represents a strong opposition to Somyot’s political position.

Sunai Jullapongsathorn , chairman of the Foreign Affairs Committee of Thailand stated that he was concerned about Somyot’s movement around Thailand and would assist Somyot’s legal team in their appeal to the Criminal Court to relocate the next hearing to Bangkok.

"I will continue to fight for my freedom from  prison. I appeal to all the international community– friends  and comrades to continue to support democracy, freedom and justice in Thailand"

On Monday 19th December Somyot starts his second day on trial on charges of Lese Majeste (offending the King). If found guilty at the end of his trial in May 2012 he faces a possible thirty year imprisonment.

Each of Somyot's trial dates is being held in various locations across Thailand and as a result his is constantly being moved from one prison to another, preventing him from having regular access to his lawyers, family and supporters. He continues to be denied bail.

For a prisoner to be moved around the country in this way is unusual and his supporters believe it is another tactic to increase the pressure on political prisoners to plead guilty and keep supporters away from the trial. So far this tactic isn't working and Somyot's suipporters were out in force on the first day of his trial. You can read a report of day one of Somyot's trial at http://freesomyot.wordpress.com/2011/12/04/summary-of-somyots-first-court-hearing/

The second trial day is to be heard on the 19th December 2011 in Petchabun Province. Once again international observers and local supporters plan to attend. Live updates will be posted at http://freesomyot.wordpress.com

UN speaks out against Lese Majeste

On December 9th 2011 a spokesperson for Navi Pillay, the UN High Commissioner for Human Rights, put forward a strong statement that the human rights office was "concerned about Thailand’s laws of lèse majesté – where anyone deemed to have defamed, insulted or threatened the King and several other senior royals can be jailed for up to 15 years."

The first day of the trial against human rights defender and magazine editor Somyot Prueksakasemsuk, who faces a lèse majesté charge in Thailand.

The trial is being witnessed by a group of international and Thai observers, with two EU representatives attending along with dozens of supporters and members of democracy groups. International observer, Siv Houng, a youth activist from Cambodia along with Lee Siew Hwa, representative from the Malaysia Support Group for Democracy In Thailand also attended the trial.

Some interviews were held:

and with his wife, Khun Joob:

I am writing to you in connection with the upcoming trial and continued detention of Somyot Prueksakasemsuk who will stand trial on charges of lèse majesté from 21 November 2011 until 4 May 2012 and who could face the maximum penalty of 30 years' imprisonment.

He has been in pre-trial detention for more than nine months since the arrest by officials from the Department of Special Investigation in April 2011.

The Thai Constitution affords the right to a speedy and fair trial. We are concerned Somyot Prueksakasemsuk may not be accorded these basic rights. We believe that by holding the hearings across Thailand with no evident reason places a severe and unnecessary risk to Somyot's health and security. We believe the denial of bail is part of an ongoing pattern of harassment and intimidation of human rights defenders in Thailand. We ask the Thai judicial authorities to ensure that the rights of Somyot Prueksakasemsuk are upheld during his detention and that he is accorded his right to a fair trial, including the right to bail and the holding of the court sessions in Bangkok.

We respectfully remind you that the United Nations Declaration on the Right and Responsibility of Individuals, Groups and Organs of Society to Promote and Protect Universally Recognized Human Rights and Fundamental Freedoms, adopted by consensus by the UN General Assembly on 9 December 1998, recognises the legitimacy of the activities of human rights defenders, their right to freedom of association and calls on States to ensure that they can carry out their activities without fear of reprisals.

We ask you to ensure that