by geertjan — last modified 2016-04-07 08:45
The next hearing against human rights defender and activist Charles Hector is rapidly approaching (23 August), but the Japanese company taking Charles to court, Asahi Kosei, still refuses to drop the case. 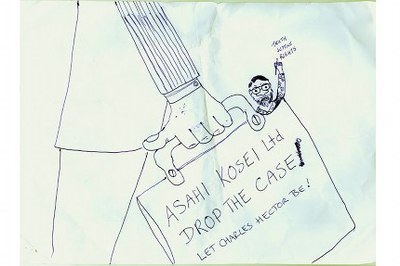 Update 5 september 2011: This appeal is no longer active.

The next hearing against human rights defender and activist Charles Hector is rapidly approaching (23 August), but the Japanese company taking Charles to court, Asahi Kosei, still refuses to drop the case.

Asahi Kosei is suing Charles Hector to stop him from writing about the threats to 31 migrant workers employed there who complained about disproportional wage deductions and lack of sick leave among other things.

Charles Hector risks a penalty of approximately 2.3 million Euros and an effective gag on further publication of any information about the migrant workers at Asahi Kosei. The company claims that because the migrants are employed via a contract agency Ashai is not responsible for any illegal conditions they may face.

The ITUC has issued a statement calling on the company to drop the charges which they state appear 'to have no purpose other than to silence critics by threat of financial ruin'.

Despite thousands of emails sent to Hitachi who source from Asahi Kosei, Hitachi has not responded nor pushed their supplier to withdraw the case.  It is now time to write to the Japanese authorities to urge them to take a stand.

This week marks a global week of action against the defamation case, join the Clean Clothes Campaign, trade unions and activists around the globe in pushing for the case to be dropped.

Below you can find a model letter to the Japanese Embassy and authorities.

Please use this letter to write to the Embassy or Consulate in your country and let them know that Asahi Kosei must withdraw these spurious charges which, if successful, could seriously threaten freedom of expression on similar cases in Malaysia and beyond.

You can find the address and email details of the Japanese Embassy or Consulate in your area at http://www.mofa.go.jp/about/emb_cons/mofaserv.html