by geertjan — last modified 2013-04-25 13:29
Today in Copenhagen activists from over 10 European Clean Clothes networks held a demonstration outside the Thai Embassy to protest at the continued detention of Somyot Pruksakasemsuk. Activists handed over a letter to the embassy representative, demanding the release of Somyot. We were told by the Embassy that Somyot had been released but we now know this is not true – we believe the Embassy made a mistake – in an ironic twist of fate Somyot was released on 13 June 2010. 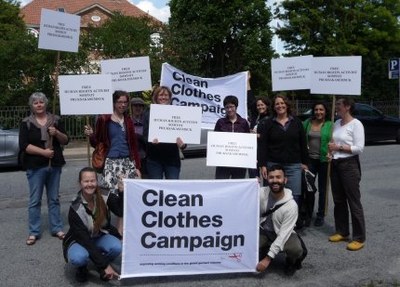 Trade unionist and labour rights advocate Somyot Pruksakasemsuk was detained on 30 April for his activities promoting democratic reforms on charges of lèse majesté, or the crime of insulting the king. Lese Majeste has been widely used to silence labour- and pro-democracy groups and activists.

Always an optimist and a campaigner, since being imprisoned Somyot has began a new job – as the Librarian of Bangkok Remand Prison! A new website has been set up in solidarity with Somyot who has written asking for books and other cultural donations to be sent to him and the other detainees there. Take a look at the site here  http://freesomyot.wordpress.com/