by geertjan — last modified 2013-04-24 09:51
April 11 is day we remember the 64 workers who were killed and the 80 who injured when the Spectrum factory in Bangladesh collapsed in 2005. Since then at least 200 more Bangladeshi garment workers died as a result of factory fires, and many more were injured, while producing garments for major European or the US brands. 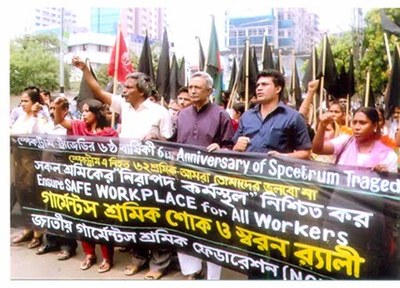 On December 14 last year the Hameem factory fire killed 29 workers who were having lunch at the 11th floor. The Hameem Group is one of the most prominent garment manufacturers in the country, producing for huge brands like Target, JC Penney, Abercrombie & Fitch and Gap.

Earlier that year the Garib and Garib fire shocked the world by killing 21 producing for H&M and Teddy.

Next week, the surviving injured and the families of the deceased will receive a final payment of the compensation they are entitled to under the Spectrum Relief Scheme that was established by Inditex (Zara) and the ITGLWF. That same day, proposals for compensation for the Hameem workers will be discussed by all stakeholders concerned.

Urgent action remains necessary to ensure that the victims of Garib and Garib receive just and fair compensation, and most importantly that systemic measures are taken to prevent future tragedies.

Buildings in Bangladesh remain structurally unsafe: building codes are systematically ignored, workers are untrained, electrical wiring is badly installed, the fire-department  is under equipped and all the time the industry keeps growing at record rates.  Meanwhile, the garment industry in Bangladesh continues to grow at record rates.

Two days after the Spectrum collapse the Clean Clothes Campaign (CCC) and the International Textile, Garment and Leather Workers Federation (ITGLWF) called upon brands, employers and the government to undertake a comprehensive building safety review.  In the wake of the Spectrum disaster many multi-stakeholder meetings were organized, in Bangladesh and internationally, and many promises were made. However, no concrete programme of action was set up, let alone implemented.

The Bangladeshi government, employers and brands are all complicit in the deaths of this many workers by failing to take the necessary action. Every day 3,5 million workers risk their lives to produce cheap clothes.

Last year on April 11, on the anniversary of the Spectrum collapse, CCC and allies called upon all buyers sourcing garments in Bangladesh to take proactive, sustained, and coordinated measures to help eliminate these systemic problems.

A comprehensive set of safety actions was compiled that companies sourcing garments from Bangladesh should take within their own supply chain to prevent future tragedies. Companies were also requested to collectively press the Government of Bangladesh and the BGMEA to take specific actions to address these problems industry-wide in Bangladesh.

The 2010 April 11 safety action agenda was discussed among others in a multi-stakeholder meeting organized in December by the ITGLWF in Dhaka, where parties agreed to organize a follow-up meeting which will be held next week, on April 17. In the direct aftermath of the Hameem fire CCC and allies, supported by several local unions, called upon the Hameem buyers to commit to the immediate implementation of one part of the April 11 safety action agenda: a building safety review and inspection mechanism. The US brands Gap, VF Corporation, JC Penny, Target, Carters, PVH and Abercrombie & Fitch committed to this first step in January this year.

The CCC is hopeful that the April 17 meeting will result in binding agreements by the various parties involved to immediately start implementation of April 11 safety action agenda, and to prevent more garment workers being killed or injured.

Next week, on April 16, the Spectrum survivors and their families will receive their final compensation payments.  The Spectrum Relief Scheme will be completed next week with a final lump sum payment to families of the deceased and the injured. Originally agreed upon by Inditex and the ITGLWF, it was scheduled to be launched in September 2006 and estimated at a total value of 533,000 Euros and was intended to provide the survivors and the families of the victims with monthly pensions based on loss of income. This is in addition to earlier efforts to provide medical care and other types of emergency relief to the injured and the families of the deceased.

Its great strengths lie in its methodology: calculations are based on loss of income, family size, as well as on injuries sustained, providing a fair deal for the victims and their families. Secondly, it allows for all parties concerned (brands, owners, BGMEA and government) to participate in sharing the costs. Thirdly, it was intended for pension payments to be made in installments (monthly or yearly) into workers' bank accounts, thereby lessening the risk of monies getting stolen or misappropriated.

Its weakness however, has been the disbursement system, and the lack of independent management capacity to oversee the execution of the scheme, which has led to many delays. These prompted the beneficiaries and the stakeholders on the ground to request a final lump sum payment.

CCC looks forward to the final payments being made with efforts being undertaken to trace those families for whom payments are still outstanding, and that the Spectrum victims will see justice.