by geertjan — last modified 2013-04-24 09:51
Relatives and friends of the unfairly imprisoned Cambodian union leader Sous Chantha gathered in front of the prison to protest his detention. They launched dozens of balloons, hoping that Sous Chantha himself would also get a glimpse of the action from within the prison walls. In December, the CCC issued an urgent appeal to demand his immediate release. 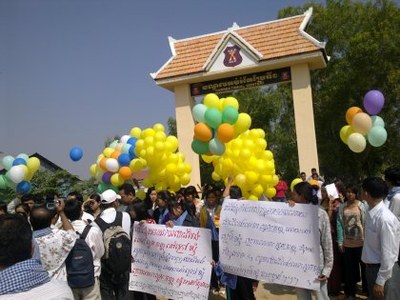 Unfortunately, there is little progress on this case so far, so please sign on for this action if you haven't done so yet.

The gathering in front of the prison highlighted the fact that Sous Chantha has spent nearly two months in pre-trial detention on framed drug trafficking charges. His arrest on November 18, 2010, followed his 1,000-member union’s migration to the pro-workers Coalition of Cambodia Apparel Workers Democratic Union (C.CAWDU). Information gathered by the Cambodian human rights group LICADHO strongly suggests that Chantha was framed in retaliation for changing his union’s affiliation.

Ath Thorn, head of the Cambodian Labour Confederation was quoted in a Cambodian newspaper: Sous Chantha was arrested one day after he resigned from a trade and joined my trade union … We suspect that there was someone who put the drugs in his motorbike”