Garment Workers In Cambodia On Strike

by geertjan — last modified 2013-04-24 09:51
On Thursday 16 September Cambodian union leaders decided to a temporary cessation of a mass strike calling for a living wage of 93 US $. The strike started on Monday 13 September with 60.000 workers but won quickly in importance with 200,000 participating workers in over 90 factories at the moment of cessation. The government invited the unions for a negotiation meeting that will take place on September 27. This is occurring in an on-going climate of threat of retaliation for supporting the striking worker rights. 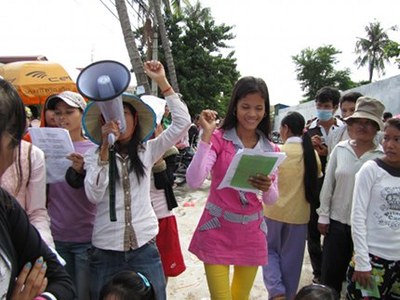 The Clean Clothes Campaign celebrates the participating workers and the organising unions with this breakthrough. We have urged brands and retailers sourcing from Cambodia, such a GAP, Puma, Inditex and H&M, to reassure Cambodia that a living wage for the factory workers will not cause an exodus of orders. With a minimum wage of less than 2 US$ a day, Cambodia  belongs to one of the countries with the lowest wage costs. We have also underlined our concern about the safety of workers in exercising trade unions activities. The government and employer association should immediately cease any interference with, threats against and intimidation of trade unionist

On Monday, September 13th 2010, over sixty-eight thousand garment workers in Cambodia started a week-long strike for a living wage. The workers are disputing a recently-established general minimum wage, and demand a higher minimum for the garment sector.

The most important brands sourcing from Cambodia include Puma, H&M and GAP. Three of CCC's Cambodian partners support the strikes, because the new minimum wage fails to meet basic needs such as food, housing and travel expenses. They demand a living wage of US$93 and better benefits.

The Coalition of Cambodian Apparel Workers Democratic Union (CCAWDU) and National Independent Federation Textile Union of Cambodia (NIFTUC), with respectively 45,000 and 30,000 members, are calling upon the employers association to enter into negotiations with them. Both unions collected about 80,000 signatures and thumbprints from factory workers, most of whom are women.

The new minimum wage was determined in July and is set to come into force for the around 358,000 garment workers in October 2010. While any increase in the minimum wage for garment and shoe workers in the country is welcome, CCAWDU and NIFTUC have raised serious concerns with the new wage structure, including that:

With the strike, the unions want to enter into negotiations with the Garment Manufacturing Association in Cambodia to achieve a living wage of US$ 93 per month, which, according to a recent study by the Cambodia Institute for Development Studies would be necessary to cover the basic needs of workers.

(the study is available at: http://www.fes.or.id/fes/download/Survey_Result_Cambodia.pdf)

The Clean Clothes Campaign has called upon key brands sourcing from Cambodia to contact their suppliers and the employers association and encourage them to enter into good-faith negotiations with CCAWDU and NIFTUC.

The action taken by Cambodian workers does not stand alone. Across Asia, workers are contesting poverty wages and deplorable working conditions.

In recent months, worker stoppage and demonstration are happening in Bangladesh, Burma, China, and Vietnam, which underlines the necessity for brands and retailers to start working on a living wage.